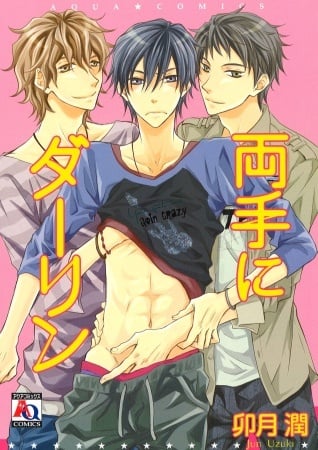 The Boy Can’t Help It

Since their parents moved overseas, Toru, Hajime and their little brother Futaba have lived together alone in the Katsuragi house. But then suddenly their problematic cousin Takara arrives!! As he enters the three brothers' lives are in an uproar, for some reason Takara doesn't try to get close to them, and his childhood friend Toru feels unbearably snubbed. When Toru tells him so, Takara quickly shows him a gentle smile, but what kind of dangerous schemes hide behind that expression--!? Palpitation and anticipation under one roof.

The super normal university student, Hiroo Eiji has a problem. That is, he can’t become popular because he always has two extremely handsome but forceful childhood friends, Haruki and Ikumi, besides him. However, when he received the first love letter in his life, he got confessions from both of them saying, “You can’t go out with a girl. I’ve been in love with you all this time…” and then they set him up and do super perverted stuffs with him…?!

Yusuke and Soji have been close since junior high and are flirting with the notion of becoming a couple. But when Soji suddenly announces his intentions to marry, Yusuke is devastated. The friends part ways until three years later, when they meet by coincidence on a cigarette break. Still refusing to acknowledge his feelings, Soji faces the clash of his still-simmering love for Yusuke and his duty to his wife - even as Masahito, Soji's rival, begins to make a play for Yusuke's heart.

Kei is an Omega who dreams to be married to a rich, handsome and kind Alpha. So he polishes his skills in order to become a good bride for his future mate. However, his body is special because drugs that suppress an Omega's heat doesn't work on him. So he relies on his childhood friend Tsugitsugu, who is a Beta, whenever he is in heat. How long can Kei keep this relationship with Tsugitsugu?

Two's company and three's a crowd...But when the third wheel happens to be a ghost, the results can get interesting. Yuuya is caught in the middle of a supernatural love triangle between Kyosuke, the ghost, and his childhood friend Katsuki. Who will he ultimately choose in this tempestuous three-way love affair?

A mild-mannered gentleman, good at his job, and reliable; Naohito's been wearing his mask of "perfection" for so long it's become as easy as breathing. That is, until he meets HIM. At the behest of a childhood friend, Naohito grudgingly attends a singles party for twenty- and thirty-somethings. With zero interest in mingling with the crowd, Naohito sits off on his own - and meets a much younger man, Tohru Akasaka, who clings to him like a puppy. Naohito's barely able to cope with Tohru's youthful energy, and they go their separate ways... but in a twist of fate, end up meeting again. Naohito's life is flipped upside down by his companion. Will he give into this young man and let his mask drop!?

Ayamu Okusawa lost his job and apartment in a coinsidence. He doesn't know how to live in big and unknown Tokyo. He comes from small village and came to Tokyo because of his grandfather's suggestion. Ayamu doesn't seem depressed but handsome stranger stops him from commiting suicide and takes him home. The stranger's name is Rin Hayasaka. He's a boss of host-club. He has twin brother named Ren who is Rin's opposite.

Shuuji is a salary man, who is a crazy-about-idols otaku. He has always been selfish when it came to his childhood friend, Tomoya. But one day, the always faithful dog, Tomoya, suddenly had his button pushed...! However, Shuuji, who always has seen Tomoya as nothing more but a childhood friend, gets the 'doki-doki' thump in his chest ; yet it's because of a male..!? A love case where the ever so submissive, faithful dog turns out to be carnivorous.