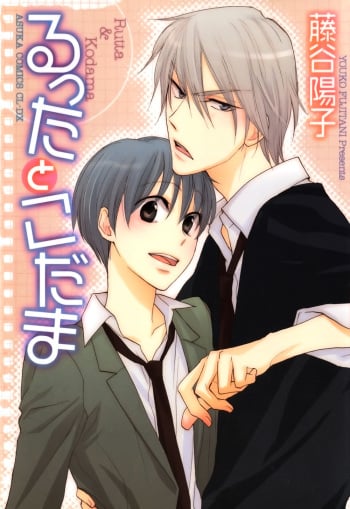 Ayato transfers into a new school, hoping for a fresh start. Sadly for him, the school turns up to be filled with deliquents, and the most feared of them all has his eye set on him. And it doesn't help, that whenever Ayato accidentally takes off his glasses, everyone around him suddenly becomes completely smitten by him.

Both series are BL romances between a delinquent and their adorable partner. They're both super cute series, so if you enjoyed one you'll probably like the other too.

Both have a bad boy falling for a sweet angel boy. Also in both cases the younger boys feel more pressured to be with the bad boys

At the university's badminton club's freshmen welcome party, everyone is scared stiff when the scary-looking Tougo introduces himself. The fearless (or maybe just clueless) freshmen Haruka ends up sharing a taxi home with Tougo... and while everyone else trembles in fear before him, Haruka finds him handsome.

Both series are about the relationship between a delinquent like guy and his super adorable partner. The delinquent guy is also much sweeter with their parner than anyone else, which is cute.

rutta and jingha and siwon and miyagi is kinda similar

Matsuoka is a transfer student whose wish is to make 100 friends. He gets along with his classmates almost at once, and it all looks be smooth sailing, until he crosses paths with the school's most feared delinquent, Sougo! One thing leads to another and... Sougo ends up becoming Matsuoka's slave!?

You Make My Head Spin

Shindo has just transferred into an extremely individualistic school. The ideal honor student, Shindo appears to sparkle with his perfect poise and presence. Yosuke, on the other hand, is the school delinquent preferring to spend his time hanging out on the school roof. But, Yosuke has a dark secret. The stereotypical tsundere, he may appear hostile on the outside, but his gruff hides a very sensitive interior — an interior that Shindo is determined to uncover!

Hime Makoto, nicknamed “the prince” – who aspires to be like the hero in a shoujo manga – is one of the most popular people in his school. However, when Ouji Arata transfers to his school, things change completely. It’s because Ouji treats Hime like a princess! Although he wants to become the hero, Hime has his face lifted by the chin, is pinned to the wall, and carried bridal style…. everything that happens to him is just like in a shoujo manga!! To top it all off, he is exposed as a virgin and is no match for Ouji in sex techniques either!

Toba and Banzawa are a pair of delinquents who are totally out of place at the prestigious alpha-only school they attend. Together they take on delinquents from other schools, and Toba is the only one Banzawa trusts to have his back in a fight. But Toba is keeping a huge secret from his friend: He's actually an omega, and he knows he'll have to leave school once his first heat comes. But he doesn't expect to go into heat right in front of Banzawa, or the unbridled passion that results when Toba's pheromones enflame Banzawa's desire...

Hase Akihisa has just moved into town and is excited to make his transfer student debut. Determined to make sure he doesn't face the ostracization he experienced at his last school, he dyes his hair blond to look trendy and resolves to make sure no one ever finds out that he is a hardcore otaku. Then one day he finds a student reading manga on the roof and the two quickly become friends, but Hase discovers there's something a little odd about this boy Oonozuka Yuu. Just why does Yuu keep kissing him?

When Shiba Daisuke confesses to his delinquent upperclassman Akiyama-kun in front of all of Akiyama's friends, getting beat up and ridiculed would maybe be understandable. But the events that follow are nowhere near what any of them would expect.