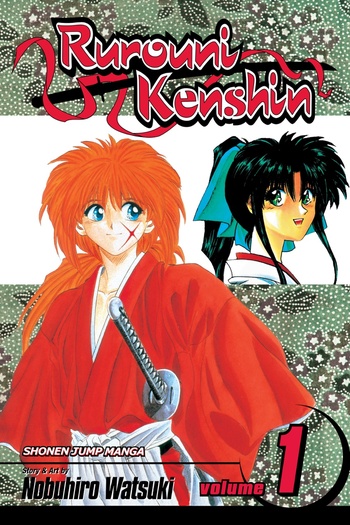 THIS REVIEW IS PURELY SUBJECTIVE (A personal warning before reading on)

I had written a separate review for the anime adaptation of this manga because this MANGA is entirely outstanding and incomparably impressive in a much more different level than the animated version. Well, the story was still the same with how it has been represented in the anime (though there was a little bit of a change midway towards its end) but I have to reaffirm that this MANGA had a more melodramatic and touching effect in terms of providing an in-depth and much more detailed background of Kenshin's whole persona.

First of all, the story and the author's footnotes in the chapters had me entirely grasping to the whole concept because of its huge relevance to historical Japan and how there is actually a real-life Battousai in the past. I'm actually a big fan of Japanese culture and I have this huge admiration to the very idea of a Samurai's way of life that I have read from books before. Mildly, the manga is not completely based off from real events (I admit) but it did reflect some accurate timelines from history that somehow become effective in having me hooked to the story. I also loved the way it mirrored the traditional settings and the characteristics of people who lived during the Era when the story took place. This manga is actually very interesting, not just because it has the gripping tale of a forlorn wanderer with a dark past and a very enigmatic charisma. In fact, it was purely more than that. The thing is, this manga has a whole lot more substance than what you would actually expect from a historical seinen piece. It was built with a purpose of getting a vivid look to human's emotions and the character's search for meaning.

Moreover, I like how it just not focuses on one genre... The drama is relative to the plot, the twists come in naturally and the fight scenes were very well-imagined. The romance in this story is also very on point, though quite old-fashioned, yet it was completely necessary to be included in order to keep the story's build-up a success towards a very unlikely twist near the conclusion that will make you sweat with a lingering feeling of thrill and anticipation for the MC's good ending.

I cannot just completely explain and describe it with words but I just love it so much. This manga is really different, with its style, the plot, the characters, and the conflicts arising in every arc it reveals. I love how the author puts a very subtle flaw on every character and how each of them actually develops their own personalities as the story goes on. It's quite long, I admit. But it was a worthwhile read. And that is why I am rating it a perfect 5 for everything and a 10 for technicality.

I'm not good at writing reviews but I'll try :)

Rurouni Kenshin is a really long manga. As expected, there are a few filler chapters. But the story overall is amazing! I actually managed to read the whole manga without skipping. I really recommend this manga :D