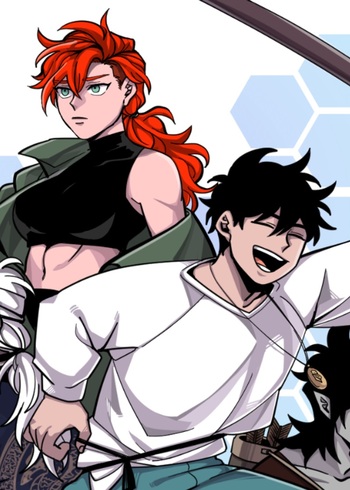 ESPERA! The most popular virtual MMORPG of the century!! But the game loses its momentum (even stopped updates and patches) when the legendary player quits... only to return 2 years later for no apparent reason! What will become of ESPERA now?!

While there's a decent leading plot and the characters are pretty funny, the art is incredibly lacking.  Also, tagging this "full color" is an absolute lie.  Instead, there's an eyesore of a comic with black and white characters and blue and green backgrounds.  It looks awful and is absolutely my new pet peeve.  That said, I don't want to be too critical, because it was a little funny, but it's absolutely not my cup of tea and I wouldn't recommend it to anybody.  That also said, I didn't read the whole thing either. Story: 5/10 because I feel like it was going somewhere, but it wasn't compelling enough to get me to stay and I was overwhelmingly bored  Art: 2/10 it would be 1/10 except I've seen much worse and a few of the panels are decently drawn, here and there.  The color is still God awful though.  Half hearted and should not count as "full color" Characters: 6/10 I'm being more favorable here because they all have personality and made me laugh a bit  Overall: 3/10 even though I gave this 1 star, and that's more like 2/10 I want to give it credit for being amusing, because somebody else might like it

For anyone clicking on this page, that's unsure on if they should read this manga. Please read the following review, so you can understand its greatness. The description doesn't do this manga justice. We open with a guy who hasn't played an mmo in 2 years. It's kind of assumed that he rage quit but we don't really get much information until later on.  We open with him entering the game once again. He spawns in wearing newbie wear (clothes of a new player) and has no money or items. He realizes instantly that he's been hacked, and he's unsure where he is because it isn't where he logged out from. All he has left are his skills and stats, but no gear. The place he spawned in at, was the battle ground for a very powerful boss. A death dragon! He sees a player falling down from the sky at high speed, after being knocked down. It's a young woman with armor. He assumes that she's going to get mad at him for not trying to help her, but rather; instead, she assumes he's a new player and offers to warp him out for free. Instead, he helps her and then they leave together. This is the start of a strange friendship between the two. They haven't even added each other, and don't for some while. They just play at the same times, so they go together. Her dream is to go to the easten continent, a realm which hasn't been unlocked. This is because the only key to unlock the expansion is non-tradeable, non-destroyable, non-sellable item that was crafted as a joke by our protaganist right before he quit. He promises her that he can get her to the continent under the condition that she buys him a weapon, so she agrees. While looking for a blacksmith, they stumble into an odd scene. A scene that introduces, who I consider to be the greatest character. A man is beating up this person and complainig about his smithing. He grabs the sword in possesion of this man threatens to hurt him if he doesn't explain himself. He continues to stay silent. The character then speaks quite a large paragraph about how he wasn't ignoring him, but is actually just a slow typer. We also learn that he has a daughter because he says that he had his daughter typing for him because she was faster, but then she threatened to stop unless he got her cookies, and this was the cause of the delay. The man then knocks our hero to the ground and walks away with the sword, stating he doesn't need him. Our main character then punches that guy to the ground and gives the blacksmith his sword back. Later on, while our main character is collecting resources to make a tool, he finds the blacksmith, running frantically. He asks why he's there, and this causes our hero to freeze as he tries to type. This causes him to be attacked. This is a common theme with our hero. It is hilarious. He practically acts mute for a lot of this series, because he is too slow. Some think it's intimidation, others respect, when really he is just a slow typer trying his best. He eventually starts to use hand signs, literal pen and paper and also, prepares some predictable diologue ahead of time, so he can copy and paste instead of typing.  We learn of his name, because when he is asked for it, he opens up his jacket and points at the word KATANA written in hugh bold writing with marker on the inside of his jacket. Katana is funny, has a great look, a ponytail, white hair, a cool jacket and is a master blacksmith that acts mute. He is amazing.  Sometime he's also like a dog, as he uses his face to convey emotions instead of his words. When one of his friends is threatened by an enemy, it's like watching a dog growl, snarl and bark at a cat. Even his attacking gives off this vibe. He's just the greatest character. As the series continues, we are introduced to more main characters, and a lot of sub and background characters. The art of the series is nice and colored in. The color scheme always changes a bit, which is nice and pretty fun. I love this series, so please give it a try. It may look like I've spoilled a lot of it, but actually. I've just told you about the first time these characters are introduced, the first two in chapter one, and Katana in chapter 3. Seeing as I got this much detail from a summary, and of only 3 out of 90 chapters+, you should really give reading it a shot. There isn't just comedy though. Later, we also get some drama, some fun, some hijinks, some major villains, fighting, dungeons and more.. It's great.