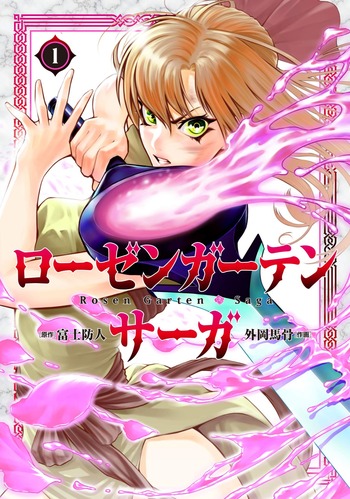 What can i say i came looking for an adventure but it was an adventure of an adult kind. Characters are all on steroids and other drugs. It is filled with adult comedy. Art is good but it is messed up. This one is not recommemded for kids

This is a gag manga filled with Adult gags. There's a lot of nudity and fucking, but usually with some sort of humorous effect. The epic sword battles--which are all drawn really well (in fact, the art in general is really dynamic and impressive)--are more about (sexually) subduing the opponents than killing them. A few of the fights are basically portrayed as clashes of fetishes and kinks (though still using swords and stuff). The fights going forward will be centered around the fighting tournament, Rosen Garten Shlacht. If it weren't for all the sexuality and lack of seriousness, the set-up would feel very similar to a Shuumatsu no Valkyrie type of set-up, with famous characters like Alibaba and Arthur Pendragon clashing. There's a lot of gender-bending and partial gender-bending. There's a recurring joke about Lynn's complete lack of sex appeal--like by having rapists unable to get erect when trying to rape fem--even though fe actually does look attractive from the reader's perspective. The mystery of Lynn's ugliness is sure to play a role as the story progresses.

It's a goofy manga with a lot of quick switches and random plot developments, leaving me in a state where I don't know what'll happen next in any given moment. In addition to that, the fight scenes are better drawn than a lot of serious fighting manga. It's a decent enough manga, assuming you don't mind the vulgar humor and explicit sexuality.