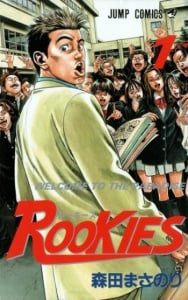 Koichi Kawato is the new Japanese teacher at the ill-famed Futakotamagawa high school, whose baseball club is composed of thugs and bullies who have been suspended for a year from all school competitions, for causing a brawl during an official match. The newly appointed teacher finds that the club members left are only interested in women, smoking and doing nothing until, under Kawato's guidance, they discover a new dream called the Koshien. However, the road to the Koshien is far from easy as many obstacles await them.

I have seriously been following this manga off and on for about 4 years now (due to scanlation errors, time constraints, etc.), and I felt like that I grew up with these boys and Kawato-sensei....This serious is what first got me into the sports genre, and I had originally picked it up because the baseball team consisted of a bunch of delinquents! All of the characters were enduring, and the struggles that they overcame were immense. There were numerous times that I laughed, I yelled at the computer, and my heart couldn't and wouldn't stop pounding as I read through their games. I actually find myself incredibly sad to have finished the series; it was great in almost every way possible. And it might have been that I felt a strong connection to these boys, or that it took me so long to finish it, but I actually teared up as I read the last panel.I encourage anyone to read this manga. Even if you aren't a sports fan or a delinquent fan, you still need to read it. You won't help but to cheer Nigoku on.Go Nigoku go! Never give up on your dreams!!! ;;;____;;;

Story: In a nutshell, it's about delinquents playing baseball and their coach/teacher who talks about dreams and inspires said delinquents to stop doing delinquent behaviour and play some baseball. It really is about delinquents and baseball and those two aspects, together or separate, are 90% of the manga in it's 24 volume run. Seriously, baseball. Loads of it, and you can bet your ass it's some damn good baseball. Baseball games, like any other game in manga form, take place over a few volumes, to better display how fucking awesome it is. Here is no exception, be it length or awesomeness. The games are just great, from the emotion of the players to the tension of some plays, the sheer magnificence of other plays, the pitching, fielding, bases and shortstop and even the catcher, no place on the field is done wrong and as far as I know, it's supremely accurate. Truly thrilling to the core and I found myself glued to the screen as I kept reading on, absolutely needing to see how a play would turn out or how a team would step up to the plate or how a gambit would work, Nikugaku Style. The practice segments take up a nice chunk of the page time and for good reason: Practice is what makes a team better, and later on it's entertaining to see them work their strengths or practice to one-up another. To see how they improve throughout their training from one day to another and all this practice leads to progression in not only the team but in themselves. The length doesn't detract from it but it's important that it was given as much page time as it did. And then there's... non-baseball stuff. Kinda like filler in a way as some of it doesn't have jack squat to do with baseball. Sometimes it's characters goofing off or random stuff that may lead up to baseball but these breaks from the game are still entertaining enough. Another aspect I enjoyed was the history of the club and how it affects the club of the present once Kawato (Coach) gets it up and running. The history can be summed up as: A pitcher threw one too many balls too close to a batter from Nikugaku and he got tired of that shit so he went over and beat his ass with the bat, sparking some guys from the audience (Nikugaku probably) to go and lay a beatdown on the other team and it ignited into a huge ass brawl that got the club banned from games for half a year. tl:dr: Brawl by Nikugaku (The school) caused the team to be banned for half a year. Art: Consistently excellent. The manga-ka has a distinct style and it works extremely well, but where it really shines is in the games. The plays, the characters, they pop out in action scenes and the look overall is fitting for a manga about delinquents in a rough and tumble baseball game. I can't really say there's much in terms of improvement or actual style change throughout but it doesn't need to improve. I have literally nothing bad to say about the art. Characters: Aside from those in the baseball club, there's the faculty, maybe a half dozen other Nikugaku students and other schools but the main stars are the baseball club. Right there is where the characters happen and where the development is obviously most apparent. They all get their time in the spotlight and that alone is commendable as no one on the team is really left out. Everybody else usually remains stagnant but there are a few exceptions to that as some non-Nikugaku characters really do change throughout the series, a total plus and said development pays off dividends later on down the road. Ask me to name some characters and I can probably name three but I can recognize them and this also blends into art but everybody has their own distinct style. Each character is their own and be it by personality or appearance, they are unique. There's a nice sense of individuality within the club and the series as a whole. No cookie-cutter, carbon-copy cut-n-paste characters here. Mega-props on that and further boosts the art-style. Another thing I loved, the fact that they're delinquents don't change as they get more and more into baseball. They may not to the bad stuff delinquents do but they sure act like them and speak like them. The dialogue they say is just plain funny. Glad that didn't change. Overall: Baseball at it's greatest. The games are long, fun, thrilling, suspenseful and masterfully drawn, telling the tale in pictures as well as in words. The characters develop over time and become their own, there's more baseball action and even though I'm not the biggest of fans, I had a blast with this one. Highly recommended. 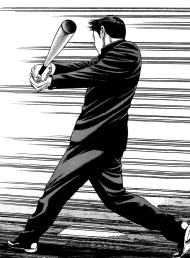