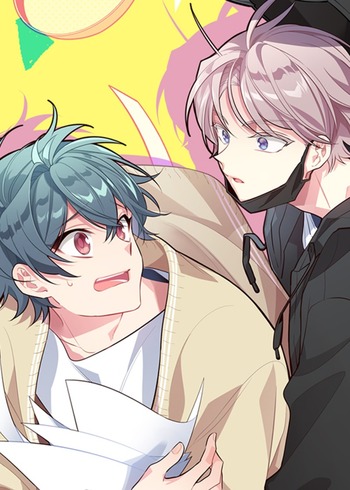 Choi Kanggo was born with a sensitive nose that can smell through a person's feelings. But when a boy who likes him approaches..?!

I low-key enjoyed reading this from start to finish. The humor had me rolling on my floor plus the wholesomeness got me dying multiple times. Both are quite long manhwas. They are very much worth reading if you want smth to make you go insane over how cute they can be. Plus both have healthy relationships and there is consent :>

both of these stories are soft and cute, and the characters are kind of weirdos but in a fun way

The fluff and story give the same vibes :D

It is extremely cute and they both are slice of life :D

The end is in sight! With three months left till graduation, Muyoung is on the high-school home straight. And it’s gone pretty well! He’s student body president, gets good grades, and has never strayed from the straight and narrow. Then out of the blue, the mysterious transfer student, Chanhee, confesses his feelings to him! Muyoung is so taken aback that he barely manages to turn him down… But with 92 days left until graduation, there’s still plenty of time for love to blossom!

both really nice and well written, the charas also give the same vibes they're both well paced and quite comedic at times

robber x lover being more comedic and countdown to graduation being a bit more 'deeper'(?)

When almost college dropout Jensen attempts to drink away his problems, unemployed Nathaniel suddenly pukes on him and ruins his night. As an apology, Nathaniel offers to help Jensen with his studies. Despite Jensen's difficulties in getting along with people, the two become friends and something deeper begins to grow between them...

both manwahs have this kind of softness to the romance. there is some drama of course to spice things up, but the connection between the two leads feels very genuine.

Xie Lian is a kind, gentle deity who just can't seem to catch a break. The crown prince of a long-destroyed kingdom, he's endured centuries of plagues, violence, poverty, and multiple demotions that have gotten him kicked out of heaven. Now a god with no followers, he's reduced to collecting scrap in the mortal realm. When his banishment is finally lifted and he is allowed to ascend to heaven for a third time, his rotten luck holds true when his ascension causes the destruction of a heavenly palace; sending the long-suffering immortal right back to the mortal realm to make up for his misdeed by exorcising ghosts. Xie Lian soon meets a mysterious man in red who is clearly more than he seems, and the two grow ever closer as they begin to uncover dark secrets the heavenly realm would have much preferred to keep hidden...

the plots pretty much couldnt be any different, but the dynamic between the leads is simualr. the not as innocent as he acts main character and the lead who was interested in him from the start

The Music Box of Petals

This is a story about a boy who can hear every tune coming from a different species known as muses when one day he meets a certain muse.

It has a very good development after knowing more abt the characters. It has a very cute art style as well. It's soft and you just want them to be happy :'>

The cat's out of the bag! Turns out that girl you thought you were in bed isn't what you thought! Rindo Tachibana is a clerk at a piercing and accessories shop who is too kind for his own good. Unfortunately, he's got bad luck with the ladies, and on top of that... he's being stalked. When Rindo suddenly gets asked out by a girl who is everything he ever wanted, he feels it may be too good to be true. And it is. After getting handcuffed to the bed at a nearby love hotel, Rindo finds out that the girl he thinks is his type actually turns out to be a man... the man who's been stalking him!

both start off with the criminal sort of thing, one a "robber" the other a stalker. both are awfully sweet bl, but my perverted stalker's cuteness factor comes later. i got very similar vibes from both, maybe the art too

It's been over a year since Takumi and Aki became roommates. They split housework perfectly, pay their bills on time, and their private lives are smooth sailing... or so Takumi makes it seem. He harbors deep feelings for Aki and hides them at all costs to preserve their harmonious lifestyle. However, Takumi's feelings get out, and now he fears the destruction of their relationship. On his 20th birthday, when he reaches legal drinking age, he drowns his sorrows in a bottle... and the minute he and Aki end up alone together, he makes a serious blunder.

Due to an assignment from college, Cho Young and Back Seungha meet for the first time. Never did Cho Young imagine that he’d eventually room together with Seungha, let alone be close to him. As the two of them spend more time together, they help each other face fears that they have tried to overcome in the past.