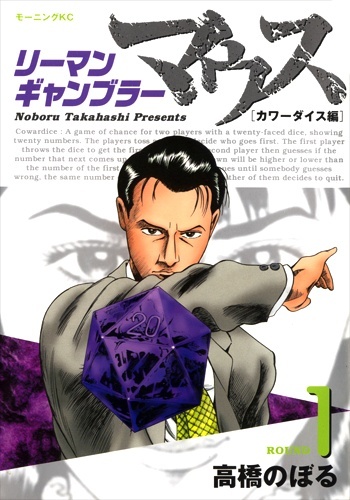 Gambling. Mahjong. Death. These are the themes of this fast-paced, undercover-agent-style manga where outrageous life-or-death gambles are made daily occurences and insurmountable odds are overcome. The most hardcore, action-packed mahjong manga you will ever see.

As a first-year student of the renowned Hyakkaou Private Academy, Mary Saotome knows her future is set for a one-way cruise to the top...that is, until an encounter with an old-classmate-turned-house-pet throws the newbie princess into the world of gambling! Can a normal girl like Mary make friends and survive debtless through only wit and luck?

This is part 2 of Gambling Emperor Legend Zero, picking up a few years after the cliffhanger ending of part 1.

That place is a den of sin in which money and lives are bet. Ai, a faint-hearted and quiet girl sunk in debt at the brothel Maidens, meets a formerly wealthy girl, Mei. If you lose the bet, it costs you your virginity!? Set in a combined casino-brothel, the sexy but cute Mei will end up doing it tonight as well.