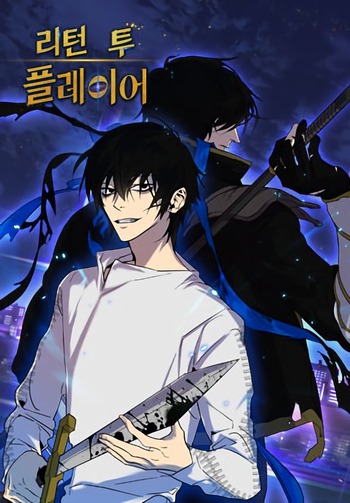 unrippledcicada and magah0 did not read the story and are just needlessly bashing it.

Anyway, on to the actual review. You'll like this mahnwa if you enjoy this kind of story with apocalyptic settings. And no, just because a story has stuff like game elements, a strong protagonist, gods watching over humans, etc., it does not mean it copied another story. Omniscient Reader is great, and I really love that novel/mahnwa too, but it's hardly the first or only other story to incorporate these things into it.

Neither is the story a harem. As far as I know, as I have not read the novel because it's only in Korean for now, there is no romance at all. Even if there is later on in the story, it would not be a harem. Also, that's really gross because one of the reviewers who bashed the mahnwa suggested one of the female characters introduced so far, a girl who's maybe 14/15 years old, is part of the harem, which is not okay since the main character Sehan is an adult and a college student. Any likelihood of romance would be between Sehan and the other female character, Jisu, who's friends with him from college.

The main character Sehan is hardly a "boring", stale protagonist either. The reviewers who bashed him say that he's generic, but he literally spent ten years in his first playthrough, until he was the last human on Earth. Ten years surviving and killing, completing grueling quests, and doing who knows what else to survive. Also, the previously mentioned Jisu, on the first day of the apocalypse, she sacrificed herself to save him. Imagine the world ending and on the very first day, you had to see a friend of yours murdered in cold blood. Since Sehan was the last person to survive, he probably saw plenty more people he knew die. It's no wonder on his second playthrough, he wants to save people and make sure this playthrough is better than his last.

A few last thoughts: I like the art style of the mahnwa. It's a litle rough around the edges, but I actually like the way this artist draws. The artist of the original web novel is a great illustrator too, but I feel like the mahnwa artist more accurately depicts the characters and their ages. It might just be my personal preference, but the way Sehan and Jisu are drawn in the novel for example makes them look a little too young. Sehan is smart and capable with all of his experience from his previous playthrough and I really like how he dealt with the basilisk in the second main quest. I like the other characters, their abilities (shape shifting, forging weapons, etc.). So go give this mahnwa a read on Webtoons!

Lmao I don't know why other reviews are dragging the manhwa so much saying it's inspired by other more famous shounen isekai (for the lack of a better term) it's like saying two villianess Manhwas are ripping off each other, you guys do realise that this is a trope a sub genre, if you will, that's really popular right now, right?  I feel like so far the uncharitable criticism takes away from the finer points of the manhwa: 1. It's a fun read 2. The protagonist is OP without being needlessly powerful 3. The comedic timing as well as the banter between the protagonist and his forced-to-follow-along friend is hilarious. The progression and pacing of the manhwa keeps you at the edge of the your seat and you find yourself rooting for the MC even though the results of the fight are quite predictible i.e. the protagonist wins, not only that but the author also gives secondary characters a good pov / plot point which is quite rare for the sub genre (it usually only follows the narrative from the protagonist's pov).

Overall it's a fun read! The plot is fun, the characters are interesting and the manhwa doesn't take itself too seriously (which is a huge plus for me)  read if you want a light hearted adventure / action manhwa.

Also it's not a harem smh

It's okay. Another standard power fantasy, but this time more generic and less original.

So a guy beats the game and regresses. We've seen this a thousand times. He uses his knowledge from his previous life and now he's overpowered and gets ahead of everyone and...yeah I've heard this before.

There are gods who use players as avatars. Interesting, the author is doing something origi- not! Gods sponsoring players...that's omniscient reader's viewpoint!

Wanna know what else is copi- I mean, inspired, from omniscient reader's viewpoint? The world suddenly turning into a game with stat screens and all. Even the main quest thing is the same, it's used to move the story forward. The observers too, they're basically dokkaebi.

I took away alot of points because of this--lack of originality. It's cheap. I don't appreciate it.

Art is fine, but not impressive. It's good, actually. The artist is great and very skilled, I can tell, but its not very high effort.

Characters are good, I guess. I'm merely 29 chapters in so I won't know how they develop. So far, though, the MC doesn't have much of a personality. No flaws, too.

This is really like omniscient reader. Both are good but I'd have to lean to this side as tow high ones better. The main character is pretty great not gonna lie. Though his backstories kinda bland. The other characters are funny and unexpected. And the plot itself is pretty good. Overall, just read it if you like those game system type of manhwas.

Straight up a worse omniscient reader. I would not even call this being inspired by, it's a blatant copy. That being said it still does what it sets out to do. The art is a bit lackluster. Some of the fights are semi hard to follow, faces can be inconsistent and the backgrounds are sometimes just not even there. However there are moments when it does look pretty nice. The characters are probably the weakest point of the comic, The main female lead has basically no personality besides being somewhat psycho and none of the other important characters have had any development at all so far. The story is pretty fun but so far none of the things the mc has done have been all that interesting. No intricate planning for certain hidden stats or items, no complex character interactions to cause certain developments and no real challenge for the mc.

All in all I would still call this above average compared to manhwa that go for similar style. I would recommend reading omniscient reader over this any day of the week and I see no real reason to go for this instead, it's just that much of a rip off that it doesn't even have any specific story elements that might make someone prefer this over omni.