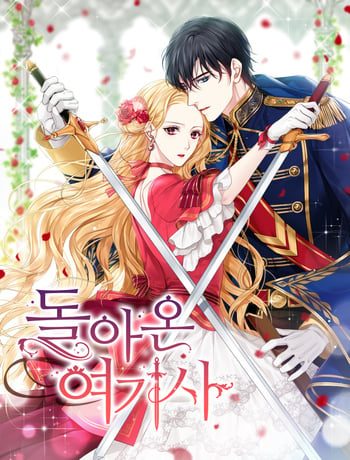 If you're looking for manga similar to Return of the Female Knight (Novel), you might like these titles.

Both main characters reincarnate upon the failure of eliminating their enemy, into their own past. Upon reincarnation, they ally their prince (ML). Using the knowledge of 'the future' they both are dtermined to prevent something from happening that happened in their previous life. Also, not that this has much to do with why these are similar, but the personalities of the MCs are extremely similar to each other (and the behaivors and desires of the ML's of both series too).

I’m Sorry I’m Not Qualified to Be Empress (Novel)

After an unhappy marriage, Rose Etoile dies miserably at the hands of her husband, the Emperor of the Solstern Empire. Somehow, she goes back to the day before the emperor’s marriage proposal to her, and at the rate she’s going, it looks like she’ll have to marry that bastard again. Rose escapes from the madman to the Helavant Empire, but must live with a brute instead. And so she decides. She would tame this beast in order to take revenge on the Emperor of Solstern.

The King of the Battlefield (Novel)

Humanity was on the brink of destruction. Muyoung, an assassin from the Forest of Death, fell to his knees. There were corpses all around him. For years, he had worked for the Forest of Death and had finally been able to eradicate them. Now, he, himself, was about to die. He closed his eyes as he felt his heart stop beating. Suddenly, Muyoung opened his eyes. By some miracle, he was still alive. He then realized that he had actually gone back 40 years in time. Join him as he decides to fix humanity’s past mistakes and fight against the 72 demons of the Underworld.

Ian Page, archmage and the first man to break through the 6th class, then through the 7th and become the most powerful mage, an 8th class mage. After a lifetime of war and killing, the continent was finally unified thanks to his efforts. Now, old, his wish is to live the rest of his life in peace and try to find salvation for all the blood he spilled. However, his old friend, maddened by paranoia, couldn’t tolerate someone so powerful, so he betrayed Ian and killed him. In his last breath, he casted a time magic that allowed him to travel back to when he was a young boy. With all the knowledge he previously had, he decided to do things better so he could end with less regrets.

The Second Coming of Gluttony (Novel)

He was an addict, a loser, a despicable human being. But, one fleeting dream that may not be a dream at all reawakens his once-lost senses. Possessing a very unique ability, he will use that, and the dream, to forge his path in the world now known as the Lost Paradise.

Golden time is a Korean Medical Drama/ Reincarnation Novel. The novel is short and progresses quickly as the main character is sent back in time to his teenage years when he got into a severe accident. Causing him to lose most of his memories and even trapping him in a coma for three months. He wakes up 3 months later where the only memory remaining in his head are his medical knowledge and his name. A story about the life of a young teenage boy growing up as he strives to save as many lives as he can and becoming the greatest doctor in the world.

A Beauty, A Fatal Concubine (Novel)

After being reborn, Mu Yunyao believes in three things: One, do not have good intentions towards others. Two, do not let the enemy have the chance to rise again. Three, do not believe in feelings. Thus, she is merciless. She is fearless. She would rather have everything destroyed than to compromise for everything. However, after one fateful meeting, a cold-blooded prince keeps following her, silently plotting on making her his wife and bringing her back to pamper her…

The World Turned into a Game After I Woke Up! (Novel)

On that fateful day, a voice in the sky told everyone on Earth that the world they called home has just been part of a simulation. The next thing everyone knew, the world was rife with monsters and dungeons and resurrecting immortal devas! I spent eleven years in that world as a deva, crawling and clawing my way through the dirt trying to make a name for myself. I wanted another chance at this, I made so many mistakes, I could have done so much better. But after all that wishing for a new beginning ended in a very bad ending… I was finally given that chance. I just had to be tortured by some smartass… But I’m going to make the most out of this! I’ll become the strongest deva out there! And this time, I’ll have my revenge!

In her previous lifetime, they had married for five years. He meant everything to her, but she was thrown away like an old shoe. After her rebirth, she gave him a divorce contract preemptively— “Divorce after one year, the terms of the contract are as follows: husband and wife shall not share a room or bed. Intimacy forbidden?” he raised his eyebrow. Who knew that after she got drunk one day, leaning on the headboard, he rested his deep-set eyes on her. "You broke the contract, Mrs, Li."

The villainess sees herself executed in front of a large crowd by the order of the emperor (her husband and the one she loves). However in the next moment after her death, she is back in the past. Monique is sent back into the past because of her brutal memories of her previous life with a prince who was engaged due to their similar age. When Empress grew and looked at the past, she killed her emotions to live as an Empress and remained one emotion, that was sickening affliction. Where in her next life, she made new connections in order to avoid getting executed again…