Alt title: The consequences of a broken promise 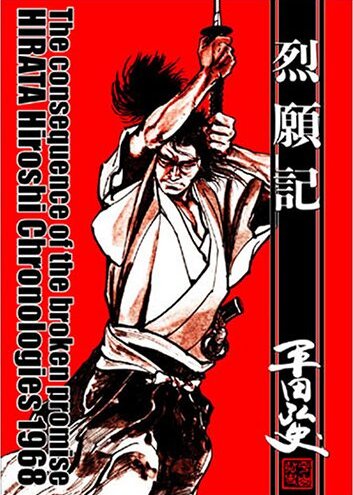 A collection of historic short stories, each associated with a karuta card. The stories revolve around the red-light district of Yoshiwara, in Edo.

In the year 1589, the Tokugawa clan is looking for a way to destroy Toyotomi Hideyoshi. Hideyoshi depends on the resourceful, intelligent samurai Sanada Yukimura to help him protect his people and foil the plots of his enemies. He also assigns the loud-mouthed, impetuous shinobi Sarutobi Sasuke to work with Sanada -- to their mutual annoyance. Though each disapproves of the other's approach to crime-fighting, they begrudgingly agree to work together for Hideyoshi's sake.

In medieval Japan, the feudal lord Nobuhira reigns as an authentic tyrant over his domain, carrying out all kinds of abuses on the peasants. He kills some for fun, to test the effectiveness of his sword blade and to generate a climate of terror that drives other farmers into blind obedience. These, increasingly reduced to starvation, are forced to pay higher and higher taxes in rice, extorted from them through coercive methods, the kidnapping of women or the taking of hostages but all their attempts to revolt are suffocated in blood in the bud.

Set in the late Edo period. Ichizou, a hired thief taker, cooperates in the investigation of the incident in which one of Fukagawa's prostitutes has been killed. While pursuing the unfamiliar decorations given to the victim's nails, Ichizou comes across a mysterious scroll painter, Matsunojou, who uses Yoshiwara as his headquarters.