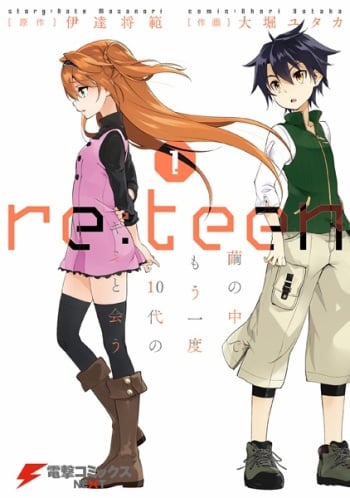 If you're looking for manga similar to Re:teen - Mayu no Naka de Mou Ichido 10-dai no Kimi to Au, you might like these titles.

The year is 2029, and Hibino is an ex-police officer who now makes a living running errands for the leader of what appears to be a high-end gang. But how do a civil uprising in Niger, the attack on a radical military figure in Japan, and a bone-marrow thief tastelessly dubbed "The Vampire" connect Hibino to the mysterious white-haired boy who is forever confined to an enormous library reading through scores of books?

Featuring two stories, the title story is about a man building an underground shelter in a small town whose brain is being controlled pert-time by aliens intent on invading the Earth. The other story, written in 1956, is about Japan after the polar ice caps melt and how a few people are trying to rescue animals.

An average of 260 humans are born every minute. On the 9th minute of the 9th hour of September 9, 2024, only 18 individuals were born. On that day and minute, 18 stars shined brightly in the sky, and these 18 children were chosen by prophecy to be the saviors of mankind. Nitarazu Hisoka wakes up, completely naked and surrounded by cold metal. Others lay around him, all approximately similar in age. As they attempt to grasp their situation, they find themselves face to face with the leader of a cult-like religious group known as "Kreetha." The explanation they receive from this religious group shatters any hope for a normal life for these young individuals. Now, they must survive the trials laid before them, while coming face to face with each others' pasts.

A man from the slums faces his doppelganger from the other side of the tracks; three guests visiting a hot spring are reminded of their past sins by a magical ringing bell only they can hear; stranded on the moon, an astronaut is stuck within a crater, sustained for a century by a mysterious life-giving gaseous fume the moon crater expels. The Crater is a collection of self-contained short stories, ranging from horror, mystery, to science fiction.

Embalming: The Another Tale of Frankenstein

After years of training, Fury and Ras are ready to face their nightmare - the monster that killed their families and left them for dead. However, they are quickly outmaneuvered and overpowered by the monster; Fury is revived by a mysterious female doctor with no evidence that Ras survived. She is, however, able to fill in many unanswered questions that Fury has: the monster is revealed to be a Frankenstein, created long ago by a scientist of the same name. After fully recovering, Fury returns to his adoptive family where he finds Ras waiting for him, miraculously unscathed, but with a body of metal strikingly similar to that of the monster...

When high school student Ageha Yoshina finds a red calling card in an isolated, ringing pay phone, he believes he's merely stumbled upon the game 'Psyren', a curious urban legend. He initially intends to trade information about Psyren to the world's foremost fortune teller for a famous reward, but after his childhood friend Sakurako – who happened to possess one of the cards – disappears, Ageha rushes into the game's dangerous world to find him. Now trapped in a post-apocalyptic landscape and pursued by Psyren's deranged inhabitants, Ageha must fight to survive and unravel this world's mystery before the game takes his life.

Kako no Anata wo Yuukai Shimashita

Since youth, Shin had a special ability to foresee dangerous situations. When his sister, Nao, was kidnapped by the people from a research center, Shin finally realized that he was not actually human, but a â€˜virtual beastâ€™ created in a genetic experiment. To solve the complicated mysteries revolving about himself and save his sister, Shin and his good friend, Tatsuki, embark on a perilous journey.