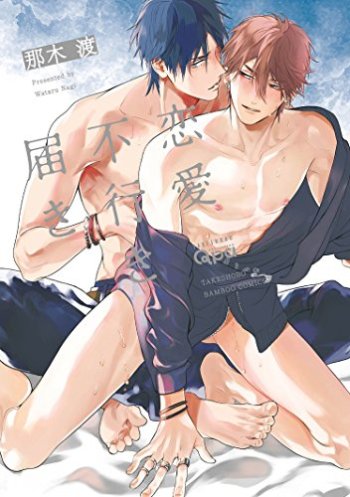 It’s Naoto’s first day of college, and the last person he expected to see was his high school ex Taichi, whom he’d dumped after a huge argument. Even though years have passed, Naoto finds he’s still steamed over some of the harsh words that were exchanged, but he also recognizes how much Taichi has matured since then and can’t help getting pulled back in. Will the discovery of his friend’s crush on Taichi fray the fragile threads of this mending relationship?

If You Hate Me So

Izumi and Satoshi are university students, friends, and recently, like an owner and a pet. Izumi comes by Satoshi's work desk almost every day to make sure he is fed and rested, like an owner. And Satoshi is always getting caught up in trouble and in need of rescuing, like a vulnerable pet. What if one day Izumi can't take it anymore and becomes Satoshi's trouble?

Senke is a gloomy and shy man who's secretly in love with Masaharu, a mailman in the company he works for. His inability to confess to Masaharu leads him to lavish his love upon a Digital Monkey on his PC, which he names Masaharu. The recession, his low-paying job as a dispatch worker, and a demanding boss causes him to work overtime night after night. One night, fed up with seeing Senke working to exhaustion, Masahuru confronts Senke and in the process finds out about his Digital Pet. The stressed Senke breaks down and rapes Masahuru. After this disastrous incident, Masaharu avoids Senke. Senke works mindlessly and fulfills all the demands of his boss until he discovers that his Monkey Masaharu has died. In his exhausted state of mind and having a guilty conscience, he thinks this to be a sign, and dashes off to find Masaharu. When he finds Masaharu safe and sound, he is relieved and collapses.

University study Tetsuhiro Morinaga has been in love with his homophobic, violent and tyrannical sempai Souichi Tatsumi for more than four years now. Even though he’s told Tatsumi how he feels and even managed to steal a kiss, expecting anything more seems like nothing more than the stuff of dreams... That is until the long-oppressed Morinaga gets his biggest chance ever. Might his unendingly unrequited love finally be returned?

Ryou Saitou is a rowdy delinquent obsessed with getting into fights. One day he meets Asuka Fujisaki, an innocent underclassman who wishes to become his pupil. Asuka looks at the fearless, belligerent Ryou with stars in his eyes, but lurking behind that facade is a desire to take revenge on him! "Now it's my turn to turn you into a girl." A scheming, deceiving underclassman versus an unyielding delinquent!

Sen Owari, a student from Japan, is studying at Columbia University. During his stay in the US, he has an affair with his professor... later to be discovered by her husband! Sen confronts him and, leading to a fight, shoots and kills him! Now convicted of murder, Sen is sentenced to serve 80 years in prison at “Under Grand Hotel” (UGH). The only imprisoned Asian boy in the institution, he’s an outcast, vulnerable and alone. When he approaches Swordfish, a prison gang leader, to get protection, Swordfish seizes the opportunity and claims Sen as his “personal property.”

Mikage, a graduate student in the Department of Botany, is shy and timid when it comes to love. One day, Mikage decides to become roommates with his financially challenged junior classmen, Nanahoshi. But, suddenly one spring day Mikage is confessed to by Nanahoshi – whose sweet personality differs from his scary appearance. For the first time in his life, Mikage is in a relationship, but he struggles to understand how to become a loving boyfriend.

From Bite Marks to First Love

An omega is raped and bitten by an alpha in middle school and has been unable to have sex with anyone since. Now forced to endure painful heats alone and without relief, he gets by in college by pretending he's an alpha. But one day he encounters a familiar scent...