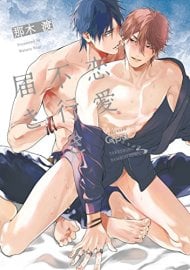 Kurama Wakamiya is a closet gay who is in charge of the stage costumes for the theater club at his university. He has been contantly visualizing about being held by a man, particularly being physically violated by his junior club member named Kirishima. Kirishima is a son of the huge fabric business family who supplies the cloths for the costume production in heir club, he is also known as a ghost-member since he rarely come and join the club activity.

The characters are annoying and their relationship kinda sucks. Like, the dude 1 is  like”omg uve raped me!!” And then dude 2 is like “idc lets get together” fast forward and now their having consensual sex but dude 1 is still calling it rape. [eye roll] Also one of the big things in the plot Conflicts is that dude 1 thinks dude 2 is straight. So dude 1 is like, always bringing it up, and complaining, worrying about it, “Oh he'd never love me cuz hes a STRAIGHT GUY , duhduh” but like, umm he stalked you for uh 3 years? Yuh really think hes straight? He also talks about it infront of dude 2 but dude 2 never reassures or clarifies his feelings to dude 1 so idk? Does he like dude 1? IDK. HEs a fuckin creepy ass dude though, thats for shore. Dude 2 is always so AGGRESSIVE and its not hot its just rapey and weird, and hearing (well i guess seeing) dude 1 crying “STOP! PLEASE!” every other panel is annoying,, nvm actually both characters are assholes so i dont even care about dude 1’s suffering anymore, actually the rapeness is probably his kink, but still the sex scenes r annoying Theres never a moment in the story where im like, “omg thats so cute” y’know? Theres nothing really appealing about the relationship, the sex is boring af (legit reused the same 2 panels, no descriptive words or interesting positions), they never have cute bickering, or moments where they work through some couple issue leaving you all warm and giddy inside, NO. The whole time im just wishing for the relationship to END. I expected abuse, rape shit, n stuff cuz its tagged, but what i didnt expect was how badly it was handled. Dude 1 gets raped by dude 2, gaslighted by dude 2, abducted and abused some more by evil side character 1 all in the same day, and just gets over it. He never tells anyone, and when he meets up with evil side character 1 again, he just forgives him like its nothing. Like his brother, who we’re told he trusts, comes up to him and asks him about it, and dude 1 is just without a second thought “oh we’re through” making it seem as if they were ex-boyfriends, when they werent. We’re never shown why he lied, or what he was thinking. Did dude 1 have feelings for evil side character 1? Well the story made it seem like they were just work buddies with baggage, nothing romantic,  but apparently not cuz why else would he not turn him in. Dude 1 outed himself, so its not like “oh i cant say anything cuz then theyll kno im GAY” , so i just dont get the point. Also dude 2 keeps misgendering his sister, and i got why he did it the first time (to show that a character is trans) but all the other times it just made him seem like more of an asshole, unless this was intentional characterization, in which case nvm For some good points: the thing with his dad was relatable. Not wanting to become dependant upon the enemies wealth and wanting to separate and become self sufficient was a good thing dude 1 had going for him, but that part only got developed in the last chapter😅 The art was good,Uhhhh the 1st and last chapters were decent, and made me almost sypathetic to the story, but yep thats it Uhhh in conclusion: boring sex, stupid relationship, asshole characters — 2/5

I remember enjoying it when it was ongoing. When I came back to finish it after it's complete, I felt gut dropping at later chapters. The sex scenes are not very good, and the main characters are pointless at the end. My regrets. 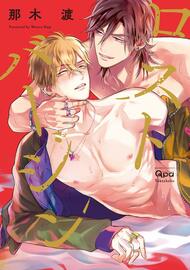