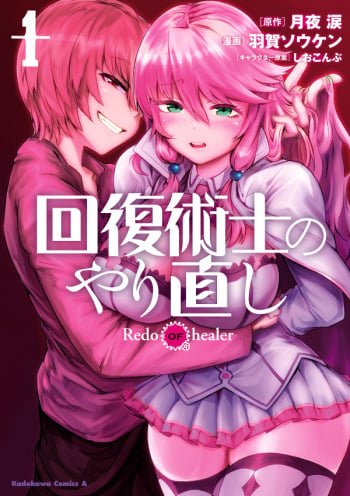 This thing boils my blood EVIL,RUTHLESS and a UNIQUE story with borderline h factors and harem just satisfying!!!

The enjoyed this revenge manga quite a bit. The plot and character development are relatively good compared to other revenge mangas like The Rising of the Shield Hero where the anti-hero just becomes a classic hero in a couple of chapters. In Redo of Healer, the MC maintains and doubles down on his anti-hero traits. The author doesn't wimp out try to make the MC into a classic hero. The revenge scenes are great and unique. I see a lot of comments complaining about rape, slavery, borderline-H, etc., but if you read the synopsis and see the tags, these things shouldn't really surprise you and also, keep in mind that this fiction and that society in this manga does not function like society in the modern world.

I actually like the story; the idea of a mistreated healer going back in time to "fix" his abusers is something that keeps me reading. But, I have to say, I really wasn't ready for this; it goes a bit too far and I do find myself wondering how much longer I will keep reading.

Absolute crap. Sounds like some kind of incel power fantasy. If you readthe series just for the fap, I don't judge you but I would keep my distance from you. If you're reading this because the plot excites you, then you need help. It justifies the idea of rape as a punishment. The reason for the anime adaptation of this series is seriously concerning. And to categorize it into "anime" rather than plain out "h*****" is beyond f-ed up.

I've noticed that the revenge genre isn't majorly appealing to me. Part of it is that it often just turns into torture porn, and part of it is that the characters are, by necessity, shallow and uninteresting. I say "by necessity" because it's very rare for actual people, with depth and motives and shit, to be this depraved and selfishly hedonistic. It takes a very special kind of sadistic and indulgent sociopath to actually act out feir cruelest desires without fear of potential negative consequences, but this type of story needs every villain plus the protagonist to have this type of attitude in order to not muddy the readers' enjoyment of the vengeance with questions of whether or not these people actually "deserved" to be brutalized by the protagonist. Now, to be fair, this manga does portray some duplicity and attempts to hide their actions, but more often than not, it just feels like these characters think they can get away with anything. And it's not really the cruelty of their actions that make them somewhat outlandish characters--it's the enjoyment of that cruelty. Cruelty happens all the time. People can find all sorts of ways to rationalize and justify the most horrible acts of cruelty. But this sadistic joy at causing others pain just because you can isn't nearly as commonplace.

One thing this manga does better than some others in this revenge genre is that it doesn't purely glorify the protagonist's own sadism. It still wants the readers to get enjoyment from seeing scum get what's coming to them and possibly to get off to scenes of rape and slave-sex, but it also shows this as coming from the protagonist's own broken psyche. Fe has gotten addicted to getting revenge, to destroying other people for "righteous" reasons. We see fem getting excited and thanking people for giving fem an excuse to get revenge on them. Fe also won't limit femself to just getting revenge for femself, but will help and encourage others to get their own revenge. Largescale, it's built around bringing down the corrupt leaders and heroes of the Jioral Kingdom, but fe's also promised to help Iblis get revenge against the demon king in the neighboring kingdom. Fe has a harem of girls that fe's manipulated and hypnotized to varying degrees. The unquestioning adulation and devotion of these girls is stupid and makes their characters feel indistinct from one another. It's also pretty stupid how there's an emphasis on these girls all being virgins before having met fem (as seen from the blood droplets during their first sexual encounters), which feels like it stems from a douchey, insecure mindset of seeing women as conquests.

A lot of the female characters look overly similar. And Keyaruga's face from before and after feir image change didn't feel very different. Like, I can tell the chin changed, but I think the artist is just bad at making faces feel unique.