Reborn as a Barrier Master - Reviews 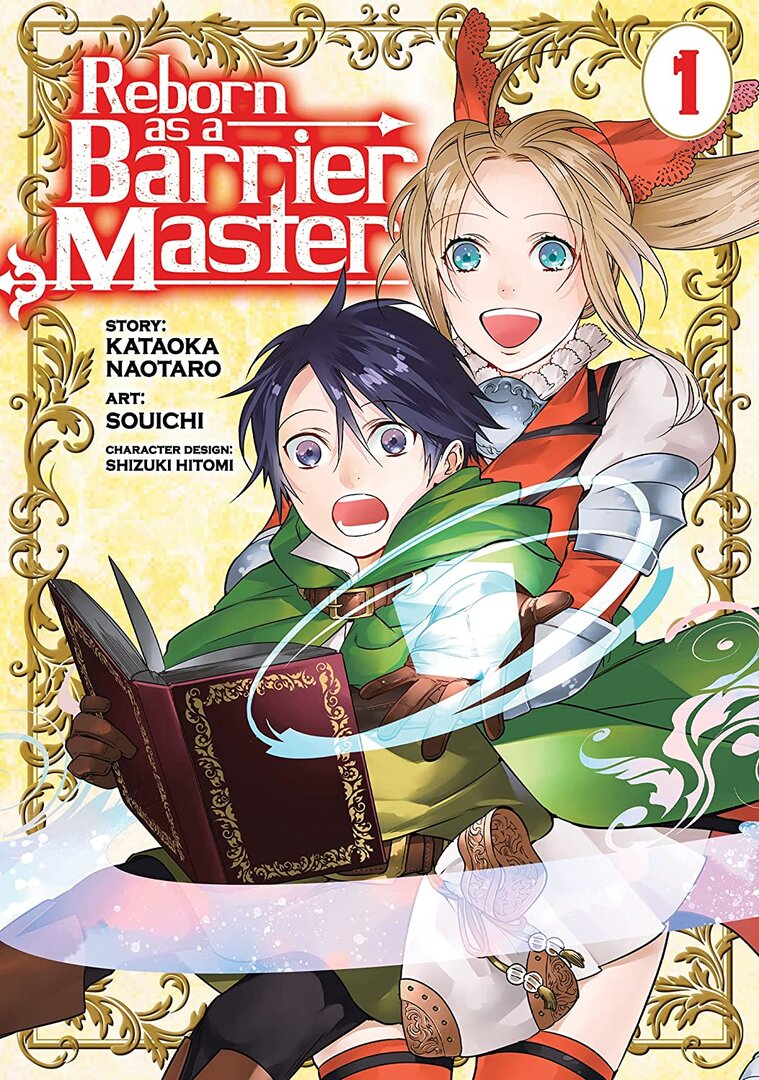 It started out pretty interesting with the wholesome beginning turning to tradegy but after the MC gets a blank slate it just goes downhill from there. The story flies by so quickly its hard to get invested in many of the characters especially when many new characters are rapidly introduced. The tipping point for me is chapters 17-19 where the MC, who had so far had his two animal companions, suddenly gets two female companions, one that looks like a young teenager at best and the other that they bought as a slave. I get whiplash from just how quickly this manga changes its tone and direction that I felt alienated from the story which had hooked me on its darker aspects. Overall I felt disapointed how the manga suddenly took a turn into something much more generic.

I don't want to review this, but the other reviews didn't really hit on the major crux of the problem I had from reading this. That is a very fast paced story, and whiplash from changing what your supposed to feel. It felt more like the author couldn't think of a good way to get the MC to move on from the opening arc and just vomitted a bunch of tragedy onto the pages so he has to go out and do stuff.

The whiplash comes from how the story is paced as well as how we seem to just move past everything that happens right away. It goes from fluffy wholesome to horrible tragedy right back to fulffy wholesome as if the middle part didn't happen or have any weight. We aren't shown a decent amount of the tragedy and what we do see didn't feel all that impactful to me. As soneone who cries from sad arcs and character death in numerous manga I was surprised how little I felt emotionally. It felt more like, "damn that sucks". Yes the art was beautiful in illustrating it. But the pace of it all felt like there was no buildup. It all just happened too fast and was resolved equally fast. As compared to "The Faraway Paladin" which handled a similar fluffy to tragedy into a more realistic tone much better.

SPOILERish for after chapter 10-12 and all the glaring problems the writing brought up:

I'm not going to write specifics about the tragedy. It's well done enough and served it's purpose. The way in which the tragedy is handled right after it happens is nice as well. Him being depressed and being seen as a monster that we later find out is from the weight of the grudges/curse of the people he has killed causing him to look like a monster to everyone else is a nice touch. I though it was an interesting take for all his dead family and friends to appear to him in his dream to tell them their finals words and that they hope he can stay a kind person. Wasn't emotional to me but was a cool way to express people getting rid of their regrets before passing on.

I'm ok with everything so far (even if it's super rushed and has no time to breathe like the faraway paladin) even though this all happens in the span of like a chapter and a half. Then we meet a white spirtit fox and a unicorn pegasus. After healing them the fox explains the curse and poof the fox is able to dispel it. And back to fluffy wholesome instantly. All that ment nothing. Worthless build up and a pointless concept. Waste of time other than enforcing the idea he couldn't go back to his previous kingdom cause he was a monster so he could go out into the world. Also now despite being an extremely kind and empathetic person, he seems emotionally over the deaths of everyone already. The story doesn't give us any message of how much time has passed either so we are left feeling like it was only a chapter ago and he's now fine. Yes he still mentions them or says he misses them and wants to do right by them. But where is the EMOTION! Give me a scene where this is still tearing him up inside one night, or where he just feels like he has to step away to cry. Even if he got over everyone dying because he literally couldn't of done anything, he absolutely could have saved the girl Eril. He was just too slow. How is that guilt not hurting him whether she forgave him or not? How could he still not blame himself or have some kind of saddness shown on his face over it. Or even give me a him throwing himself into training to help him get over it so he will be better and save the person next time. He knew these people for like 12 years and lived with almost all of them. One of them even literally betrayed him and all his family causing their deaths. Where is the resentment and anger he should still have? Revenge doesn't make all that go away. Especially not when he gets revenge right after their deaths. What about emptiness from avenging them? I know everyone deals with death and grief differently but cmon make me care about him or the situation outside the fact you just murdered the entire cast to this point other than the mc just so you can give me some garbage soft reset of your story. Not to mention he literally kills dozens if not hundreds of innocents that were fleeing to the castle for safety. How does that not weight at all on his conscience as such a kind and loving mc? All we get is, "man I bet those soldiers I killed had families and loved ones too, no I can't think about that." What about the straight up innocent people? Not a spare thought of that? He just gets over mass genocide and killing tons of innocent people so easily and is right back to happy go lucky good guy. Not even a hey I should go back and try and keep the country my family protected, for most likely generations, together and not destroying itself from civil war or invansion and occupation in the aftermath of their entire heirarchy disappearing in a single day. Just straight up dips and leaves to another kingdom like it's not his problem or like his family wouldn't want him to help their citizens. Or that he wouldn't want to go rebuild his family's property and whatnot in their honor as a continued keystone of that country.

The next part are just minor plot holes that formed right after and I stopped caring about reading this any longer so who knows how they get resolved. But they seem important enough that they should have been addressed by mc's actions already and shows that the writer doesn't really seem to care about any plot holes and will use any bs reason to move the plot forward regardless of what should be a character's motivations or desires.

The pegasus tells him it was abused by the royal family where the MC is heading and was barely able to run away, but says it will follow the mc regardless. So our kind mc just ignores the pegasus feelings and goes to said kingdom's capital with him in toe. He meets the prime minister and tell a modified story where he didn't genocide probably at least a thousand people including innocents at the royal capital. New prince tells mc how the evil aristocrats are pushing up the princess to rule the kingdom and the good guy prince, grandson of the prime minister, wants the mc to help them by being a bodyguard. He accepts because he is a kind boy and thankfully chapter 12 is finished and I can end my suffering.

Some minor notes about his time in the new, but somehow similar coup brewing kingdom. Firstly, the mc establishes he knows nothing about this new kingdom. Nothing about their royal family, polital set up, tensions, whose trust worthy and who isn't. Secondly, just the wildly blind faith that he takes everything the prime minister and this one royal say to him as truth without any questions or asking around or talking to the aforementioned princess. He also never asked the fox to ask the pegasus which specific royal family member a bused him so hecould get a better understanding of this kingdom and who may accctually be evil or if the person he agrees to protect is the abuser. Also it feels like it isn't addressed at all but I guess no one other than the mc can see the spirit fox. That's also ignoring the fact he brought a rare unicorn to the city where an even rarer version of one had presumably recently escaped from.

If you read all this and want to comment something like well the Prime Minister said he was best friends with Falco, the mc's master. Yea says that guy. I can say I was best friends with a celebrity when I was younger to a stranger. That doesn't make it true. Falco never mentioned him. He never said if something happens to him seek out said person. For all we know they were rivals and were never on great terms. We also know that Falco left that kingdom to serve Balsam in a different kingdom so that shouldn't paint a great picture of the new kingdom to the mc. But none of this is brought up because we don't explain stuff here, how dare you use your brain even slightly when reading this story! - Author, probably.

Well it has a really interesting history and some really good characters but it  is a new manga so it has a lot of potential, and one good point is that it is not like the usual isekai manga it deal's with some mature themes so don't expect to be always humerus. I think you should give it a try, at least use the rule of the 10 chapters (read the first ten chapters) .

For those who dislike heavy stuff like killing you should avoid this manga.

Story started well.
But after what went down from chapter 5 to chapter 8, I personally* couldn't handle it.

Other people will most likely enjoy this manga though.
MC's power gets built up steadily over time, and isn't given some sort of instant power.

I would however consider on tagging this one with the 'Drama/Tragedy' tag, since I believe that the events that unfolded between chapter 5 and chapter 8 should fall under that category.

Although I dropped it after chapter 8, I will still give this manga a 5.6/10.

*I'm not good with tragedy/drama manga's in general, hence me dropping it.

The plot twist is good and the mc is interesting.