Alt title: The Legendary Rebuilding Of A World By A Realist Demon King (Light Novel) 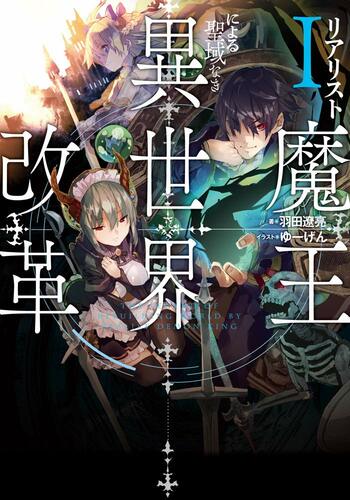 If you're looking for manga similar to Realist Maou ni Yoru Seiiki naki Isekai Kaihaku (Light Novel), you might like these titles.

Hiiro was reincarnated as the third prince of a tiny nation. In his search for a way to strengthen the country, he dabbled his hands in the omnipotent alchemy. Along with his modern knowledge, he improved the country’s production processes and introduced salt-panning. In this small land surrounded by larger countries and the threat of magic beasts, Hiiro declared before his despairing citizens that he will ensure them a prosperous life. “What I want is not just to save the nation. I want to create a better tomorrow for you all!” The nation-building of a small country by his own hands starts now!

One day, a train accident occurred in the morning. It was the start of everything. The people who were riding on it were invited into a white space. What awaited them there was an old man who claimed to be god. The old man said: "I will transfer you to a different world. I will give you a power to help you survive." Several hundreds of cards facing down appeared in the mid air. What Fujiwara Nobuhide, a trivial temporary employee drew, was [The ability to make a town]. This is story of a certain man who has the ability to make a town in a different world. At first, it started as something like Edo from the Tokugawa Period. However, my goal is a modern city. I’ll do my best!

I was reincarnated as a daughter of a Duke. However, when I regained my memory, I had already reached the “ending.” My engagement had been cancelled and if things goes according to its “course,” it was set that I will be imprisoned by the church. Where is my bright future?

A protagonist reborn in another world. Apparently he had been reincarnated as an abandoned child. Before his eyes were abandoned children like him. In order to survive, he led them into farming. Little by little, orphans gathered, and upon hearing rumors of a village, others began to migrate. The group that had been nothing but children had become a village before anyone realized. And then various countries in the surroundings started to have an eye on it…

After a god screws up and accidentally takes high schooler Shou’s life, he offers him reincarnation with a gift to make up for it. Shou asks to retain all his old memories for the new life. Shou is reborn as Will, a noble’s son in a world where magic use is common and involves knowledge of kanji characters. With all his memories, he’s a brilliant toddler, and when he experiments with magic, he finds that he has an amazing talent for it! What’s more, though he was smart but unloved in his old life, in his new life he has a mother and a father who both love him deeply. His future as Will is looking very bright and cool!

As someone who died because of overwork in some super black company, before I knew it, I already reincarnated as a baby named 『Sefiria』 in a world of sword and magic... But, having been born in a poor village with no ability, God... what are you trying to do? As someone who’s forsaken by heaven, I’ve found some hope ——- that is the shocking truth about 「Magic Formula」 and 「Programming language」 resembling each other. This is it, my story about crawling up from the depth of the abyss of 『Absolutely don’t want to work』.

A hero is reincarnated in a different world. He gather together orphans and starts a farm. Over time as more children arrive, the farm becomes a village. Founding a orphan village in another world.

High School Prodigies Have It Easy Even in Another World! (Light Novel)

Seven extraordinary high school students caught in an airplane accident wake up in a medieval fantasy world where magic and beast-men exist. But they don't panic—instead, they build a nuclear plant in a world without electricity, control the economy of a large city, and declare war on the evil nobles!