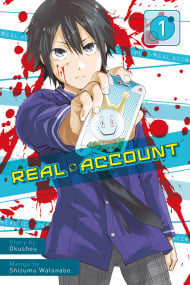 Haiiii~  I've read the first volume and the 24ch of the second volume. It seems like they divided the story completely for some reason, so the first volume is based on one character, and the second is based on another. It seems to me (this is only a guess) that the whole first volume was actually a prototype (or even a ''pilot'') of this series, and now they are continuing the series as if vol1 didn't happen? I'm not sure what happened but I do like this series. Considering this ''theory'', I'll be focusing more on Vol2. Real Account. Imagine if you're on twitter and suddenly a HUGE BLUE BIRD COMES and takes you to a virtual world of NEMESIS where you have to play WAY over the top games in order to survive. Cool, right? Let's get on with the review! STORY The whole story is based on thousands of people getting pulled in a world that's based on a social media (similar to Twitter/LINE), and in this world they have to play ''games'' that are set by this mascot called Marble. The idea of the story is not that bad, and the story really does have debth and is really fun to follow, BUT... This manga is EXTREMELY fictional and lacks any kind of reason and sense. The story is insanily over the top which doesn't really ruin it for me. I did expect a different kind of approach on the story, but I do like how crazy it is... AND entertaining! What's most ridiculous to me is that people are dying like crazy. The antagonist is merciless to the point where it's unreal. What I really dislike is that somehow, the protagonist always gets to ditch the rules. It happened a lot in Vol1, but not as much in Vol2. So yeah I did find that a little bit annoying. In conclusion, the story is very entertaining, however it's WAY over the top. Not saying it's a bad thing, considering it's a battle royale kind of story, I've seen much worse haha. Based on debth, development and entertainment, I will give this manga a well deserved 8/10. The whole volume 2 is very well done so far. ART Again, comparing art based on volumes, Vol2 has a much better art (they probably got a better budget). I like the amount of detail, it's very polished and just well done. I also really like the style. I'm no expert in manga, but I do think the style is great. I like how eyes are drawn. Feels like something between TROYCA and Kyoto Animation (I know comparing anime to manga is stupid, but so am I) So basically, I love the style, details and the atmosphere. It's all nicely done. I'll give it a 8/10 CHARACTERS I LOVE the characters in Vol2 (vol1, I don't know her) Let's start of with the main character. His name is Mukai Yuuma and he has this secret online life where he's super famous, but that turns out pointless once he gets sucked up in virtual world. He's very smart and will always find a way to save his ass from death. I like him, he's very ''herp derp i'm the protagonist'' but I like how clever he is, despite it sometimes being... too convenient? You'll understand once you start reading. Well developed and somewhat interesting main character. Secondary characters are also interesting. There's a tsundere super cute girl, a busty nerd girl and a former crossdresser... Most of them are well developed and I love seeing that. OKAY THE ANTAGONISTS! I LOVE both to death. The most notable character actually... Marble. The main antagonist. So sadistic, so brutal and merciless. Kills basically anyone who doesn't follow the rules (except the main characters of course *sigh*). There's a huge plot twist regarding Marble and he's a very well done villain HOWEVER. Can we talk about the secondary antagonist? My absolute favorite character from this series. His name is Kurashina Mizuki and he's a person that's addicted to seeing despair. He's so creepy and eats raw meat but I love how they presented him and I hope to see more of him in upcoming chapters. So, to sum it up. There are plenty of characters, and most of them are really, really likeable. Especially the bad guys. I'll give it a 9/10 OVERALL This manga is great, and surprisingly fun to read! The art and the characters are great, and the story is decent. Great title for anyone who likes high stakes games and seeing people getting killed! Rate if you found this review helpful, funny, or just like it. I have more anime and manga reviews so check them out if you want! Thanks and have a nice day ^^

Short Story Review:  This manga was a huge surprise since I dont usually go for shorter mangas. Anyway the story is extremly inventive and a great reflection on cyberfriends vs., ya know, Physical ones. The basic premise is that people involved in a Twitter-like site are sucked into their phones (Matrix-like Life Rules) and they compete in puzzles and games which can result in death but is usually not a neccesity. People have to keep at least one follower otherwise they die, the biggest problem is that if anyone you follow dies, you die too, so that encourages a rapid depreciation in followers.  Since this is still going I am excited to see what happens next.

Story: The story is amazing! Within every arc, it shows a different lesson. It also uses every detail and is great at world building. The story itself is kinda unrealistic, but was it really meant to be realistic in the first place? It starts off with a sterotypical: "Oh no, I got stuck in a game!" and then proves to be a thrilling story, with a mix of action and humor.  Art: The art is drawn nicely. I don't know how to grade art that well tbh. There are a lot of ecchi scenes btw, if you're into that stuff.  Characters: The main character has amazing character development. (Spoiler) The main character basically goes through some of these stages. At first he appears as your stereotypical kind hero. Then it's revealed that that was just a facade and he's actually some empty genius, who then becomes an edge lord. Then there's some more character development- blah blah blah blah. (Spoiler Done)