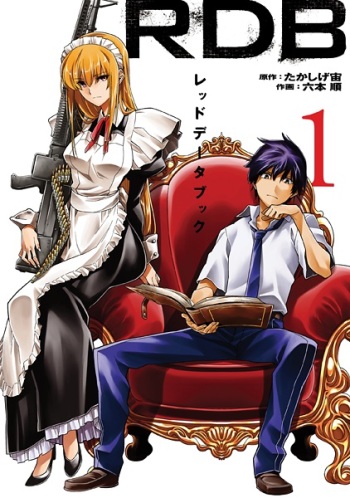 Masaru Saiga is a fifth-grade boy who aims to become a puppeteer. After Sadayoshi Saiga — the CEO of the giant home telephone maker Saiga and Masaru's father — passes away, Masaru inherits 18 billion yen. Masaru is targeted for his wealth, and is saved by two people. Narumi Katō is a man who has studied Kung-Fu and has a weird illness called "Zonapha Syndrome," and Shirogane is a silver-haired woman who controls the puppet "Arurukan" (Harlequin). Together, Masaru, Narumi, and Shirogane get thrown into various conspiracies by those who would try to steal Masaru's fortune.

Youtarou Hanafusa is a descendent of the “Knights of the World.” With the Knight’s Code of Chivalry hammered into him since childhood, Youtarou cannot stop himself from saving damsels in distress. He wears a mask, and is known on the street as “Knight Lancer” but he has always kept his identity a secret. While on an outing, Yotaro saves a 6-year-old girl, Makio Kidouin, the only child of a powerful business tycoon. When Youtarou discovers that Makio leads a lonely life in a huge estate, he resolves to protect her. He and his friends disguise themselves as lodgers and move into her mansion.

Mankai Company is a far cry from its glory days as an all-male theater. With only one member left and debt collectors at the door, it’s no wonder Izumi Tachibana finds herself in over her head when she boldly confronts the yakuza’s loan sharks, promising to bring her father’s theater back into the spotlight. She might be able to recruit enough talent, but can they bloom into the actors she needs?

The Duke of Death and His Maid (New)

It’s been ten years since Yuuko disappeared from this world, and true to his word, Watanuki still remains at the shop waiting for her return. One day Doumeki – who is now a professor of ethnology at a university – pays a visit to Watanuki; he informs the man of a house he was sent to appraise. While there Doumeki found various old artifacts such as books and charms, plus a mysterious girl acting strangely since her grandmother died a month ago. When the young granddaughter proceeds to ask for Watanuki by name, can the bespectacled boy get to the root of the problem and help her return to who she once was?