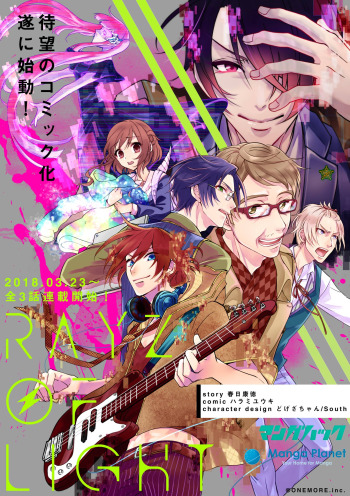 In the year 2024, Ernest Serano was kidnapped and ransomed; the event was known as the Laughing Man incident due to the involvement of a world-class hacker of the same name. Six years later, the police force Section 9 finds itself in the midst of a terrorist plot and conspiracy unlike anything they've ever known. The Laughing Man - with the ability to hack into even the eyes of those around him - has returned, and his motives are unclear. The Major, Batou, and the rest of Section 9 must race against the clock to determine the reason for the Laughing Man's re-emergence and unravel the twisted conspiracy of major corporations around them...

In the not-too-distant future of 2032, the frontier dividing humans and machines has been crossed. Crimes comitted by flesh-and-metal cyborgs are investigated by Section 9, an elite counter-terrorist squad run by Chief Aramaki and his cyborg assistant, Major Motoko Kusanagi. Section 9 has faced countless adversaries in the real world and in cyberspace, but none like 'The Awakened.' It is believed that this lethal group of terrorists can take over the minds and bodies of almost anyone. Used as tools to commit crimes against the state, the victims are unaware of who or what is controlling them. When Major Kusanagi captures one of the victims, she hacks into his cyberbrain to learn the ringleader's identity-what she discovers leads her on a journey deep into the heart of cyberspace, a journey that shakes her to the core.

March 6, 2035. Motoko Aramaki is a hyper-advanced cyborg, a counter-terrorist Net security expert, heading the investigative department of the giant multi-national Poseidon Industrial. Partly transcending the physical world and existing in a virtual world of networks, Motoko is a fusion of multiple entities and identities, deploying remotely controlled prosthetic humanoid surrogates around the globe to investigate a series of bizarre incidents. Meanwhile, Tamaki Tamai, a psychic detective from the Channeling Agency, has been commissioned to explore strange changes in the temporal universe brought about by two forces, one represented by the teachings of a professor named Rahampol, the other by the complex, evolving Motoko entity. What unfolds will all be in a day's work—a day that will change everything, forever.

Ghost in the Shell (Light Novel)

In a ruined city, Takeru comes across a suicidal young girl named Konoha. She's deathless, and she's being used as a guinea pig by a cruel organization. Seeing no meaning to her life, she fled her captors to seek a way to end it. Takeru has a lot in common with Konoha-- he's also deathless. He's made a life for himself, though, locating people by contract. After he rescues her from her pursuers, he convinces her to continue living. Maybe she'll be able to find a purpose, as she and Takeru face the future together.

9 no Puzzle to Wise Man

In the near future, a BCI controller that reads your brain signals and allows your consciousness to dive into the virtual world of the Internet has become extremely popular. Katsuro, who was arrested for a certain crime, was adopted by police officer Yumeji and serves his prison term while living with his adoptive sister, Rin. However, at the request of his adoptive father, Katsuro investigates Internet crimes in exchange for reducing his punishment, bit by bit.

Shortly after beginning a new life for himself as a private investigator, former police officer Goku loses his right eye in a freak accident and, through the aid of a secret benefactor, receives a cybernetic implant as a replacement.

Dante's life on Amigasa seemed normal enough to him, even though everyone around him called him an oddball. But when a chance meeting with a young woman named Aoi changes everything, Dante can no longer sit idly by...unless, of course, he is made to!