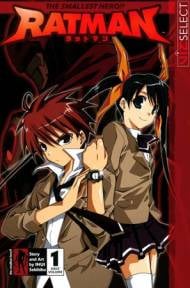 A boy in highschool is smaller than his peers, but has held the ambition to be a hero since he was saved by a hero called Shiningman as a child. No body believes in him until one day his friend is kidnapped by a crew of skeletons. He wants to save a friend but can't, and then a hero shows up. He is defeated and asks the boy to take his watch and transform. He does so and upon transforming, finds out that the kidnapping was fake, and his friend is actually the younger sister of the villian who runs the organisation. He is transformed into a monster called RATMAN but decides that despite having been forced to work for this organisation, he will be a hero. The people in the organisation are actually pretty good people, and the skeleton underlings are called the Jackeys. They all have names with Jack in it, and they're both funny and quirky. When they break into a house, they dance around in women's langerie. When they're in a car chase, they ride little girls' bikes. When they're in disguise, they just wear tourist clothes and baseball hats over the skeleton uniform. They're my favorite part of this manga, and worth the read on their own. Anyway, this story is about our hero trying to be a hero, while fighting other heroes that are trying to kill him, without killing them. He just wants to be a good guy, and when he finds a hero who doesn't act like one, he lectures them and teaches them a lesson. The way the art reflects the difference between people and the monsters is great. When our main character transforms into ratman, this new form looks incredibly detailed, but also differs in both style and colour pallette. His normal form is more solid and colorful, and we see his emotions in his face; but his ratman form looks more like a detailed sketch and it's intensity only adds to the intensity of our characters emotions, while the colour pallette is more focused on certain colors, dark colors, and the linework in the drawing shows his emotional state. As ratman begins to lose himself and act more out of rage, there's more intensity in the art, and the characters linework shows more anarchy. The Jackeys are my favorite characters. This skeleton crew is always doing something funny, and acting like the comic relief. At the same time though, they're always keeping an eye on our main character like babysitters or watchmen. They always go on missions with ratman, and each possess their own skills; but they still act out of a quirky nature, and show that in their actions. Our main character is seen as a villian, and often attacked by heroes that he adores. This, along with the way the heroes act, makes us villainise them and view them as terrible people until we learn more about them.