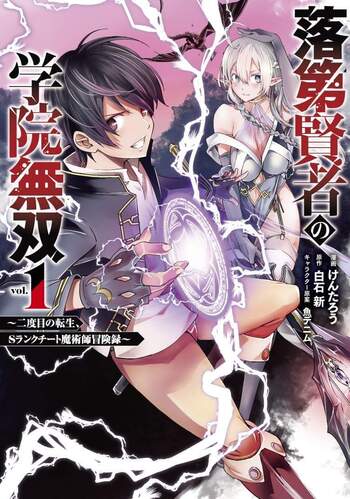 If you're looking for manga similar to Rakudai Kenja no Gakuin Musou: Nidome no Tensei, S-Rank Cheat Majutsushi Boukenroku, you might like these titles.

The world's strongest sage will stop at nothing to achieve greatness⁠—not even reincarnation! But while his rebirth goes better than he could have hoped, Mathis lands in a world where no one recognizes his potential. Now it's up to him to prove everyone wrong.

A god was suddenly prostrating in front of Kayano Takumi. He was apparently killed by mistake. Moreover, he can’t be reborn again. However, he is able to live in a different world? Then, let’s do that, please. The god made a mistake again and transferred me into a dangerous forest. Seriously, what’s going on? Besides, there are children here. I can’t leave them here, I will take care of them.

Hazuki Kagimura, a normal girl who is usually alone, with her relationship with her new family not going so well, retreats every day to the world of stories and books. One day, after school, one of the library's bookshelves sends her to another world with a magic school, where she meets Shizuka Tsuchimikado. She finds out that girls (called "mädchen") who attend the school are selected by old fairy tales and folk stories to wield their magic, and are taught how to wield it in the school, all to compete at the annual Hexen Nacht (Witch's Night) competition, where girls represent their schools in magical duels. The winner of the competition gets to have one wish magically granted. The school has girls who are chosen by such stories as Kaguya-hime no Monogatari, Issun-bōshi, Der Freischütz, Shuten-dōji, The Little Matchstick Girl, The Gigantic Turnip, Arthurian legends, and The Ramayana. Hazuki herself is chosen by the Cinderella story. She begins her new life at the school to become a magic user, and be friends with Shizuka.