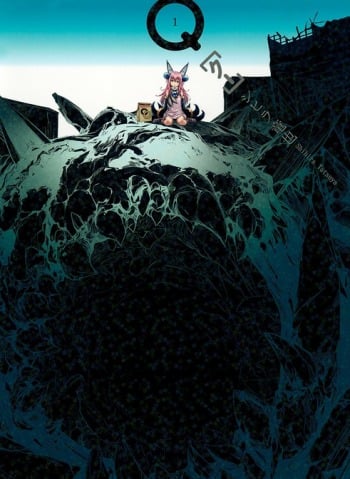 In the future, Earth has become so polluted that humanity is forced to live in enclosed shelters. In Japan, the shelters are divided between the "inside", which caters to the country's lucrative anime industry, and the "outside", where most people work to support the people working on the "inside". S-zawa is one such "outside" worker whose job involves sending messages into space. One day, he's approached by the ailing embodiment of Earth to send a message before she collapses. Shortly after the message is sent, other girls similar to Earth start showing up at S-zawa's workplace in an effort to help Earth, but he has a thing or two to learn about what the planets and their moons are really like.

Set in the near future where Mother Nature has decided to fight back against all of the human encroachment. Vines and foliage entangle cities, as large wooden mech-like creatures called Arethusa rampage through cities. Souma Shin, a punk kid out of Japan, comes to visit his brother Ken. But all hell breaks loose as Shin finds a group of small kids being used for military purposes, and tries to save them in the confusion created by an Arethusa invading the compound.

Which star shines the brightest in this endless darkness? We begin our dive into space to take hold of this shining star.

By the mid 23rd century, the foolish decisions of mankind have led to the collapse of Earth's environment; humanity and all life on Earth are extinct. In the hopes of someday restoring the world to what it used to be, man, before being wiped off the face of the planet, built an immense tower. Inside lives Louis, a supercomputer charged with keeping the DNA of all living things safe until a time comes for it to be released and restored. This is his story - a story that spans millions of years and beyond.

The fate of the Earth has been entrusted to a single woman! A new SF comedy series! As more and more witnesses report seeing UFOs, a plain woman named Hoshi is working late at her part-time job. But she has an important secret!

A sudden advent of an enigmatic creature pushes the world and our young heroine, Yuki, into the realm of the surreal.

Twenty minutes from now, visitors from a far-off world will fall into Earth's orbit and issue a most unexpected request…these "Emissaries" invite a single human being to be selected as a representative for all of Earth in an intergalactic Parliament. Mankind is given five years in which to prepare this volunteed for the rigors of space travel and the intricacies of alien diplomacy. Scientist Dr. Richard Wymond devises the ZETTA serum -- a nano-biological cocktail that will augment its recipient with nearly superhuman abilities. But when Wymond's daughter is mortally injured in a freak accident, he makes a fateful decision, and rather than let her die, he injects Evie with the world's only sample of the ZETTA serum. Now the fate of the world rests on the shoulders of one 17-year-old girl. How will Evie cope with this awesome responsibility? Will she survive the strange political intrigues of Parliament? And more important, are the "Emissaries'" intentions as honorable as they have led us to believe?