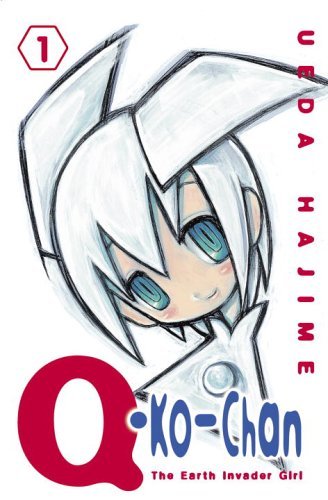 Q-Ko Chan, a work by FLCL mangaka Ueda Hajime, is sci-fi warfare in a quasi- post apocalyptic context with the cutest mechs you’ll ever see. It opens with the character Kirio encountering Q-Ko, the cute battle mech who can morph into a battle ready form. The story gets rolling when, meeting Q-Ko, Kirio is asked to “board her now!” from there, this story of teen angst, awkward romances, sexual innuendos, and mech battles ensues.  The mechs, of which Q-Ko is only one, partner with pilots who match with them and to whom the can “open their hearts.” The mechs – or “sisters” – are one type of alien and are part of an intergalactic struggle for the fate of the

The similarities between FLCL and Q-Ko are strong. Kirio is yet another angsty teen male protagonist only vaguely interested in the life he leads with a stunted relationship with his family. The town in which all the action takes place operates in a sort of closed space. The sci-fi framework is profoundly bizarre – though admittedly nothing like the level of strange reached in FLCL.

Hajime’s characteristic artwork – seen both in FLCL as well as in cameos such as the ending credits of Bakemonogatari – heightens feelings of surprise and awkwardness in his characters. His art can be both playful – fitting for the crazy twists and turns of the story Hajime tells – but also highly realistic and detailed. There is both a unique and quality to Hajime’s art that makes his work some of the more recognizable in the industry. That skill is on full display in Q-ko.

Also characteristic of Hajime’s work, it is always serious in its own right yet equal parts sarcastic parody. How else to explain moe mechs and the absurdantist plotline? The whole project shifts back and forth between intensely interesting and utterly confusing and ends at the most unclear point in the entire narrative. In many ways, it seemed as if Hajime simply got tired of the story he was writing and decided to leave the numerous interesting strands of the plot line in their frayed and unfinished state (it is so unclear what exactly happens at the end of the story that the translator inserts a note explaining that, yes, the story really does end that way). The close of the story is unfortunately abrupt, as Hajime has built up an interesting enough narrative world and an interesting enough back story that the potential is palpable. Sadly, this only heightens the disappointment at the end of the story.

The character development is both a tad too hackneyed and also too thin. Kirio is the only character we really learn much about, while his sister Furiko, his mother, and the cast of friends surrounding him are anemically described. We are given a hint as to the nature of the angsty relationship between brother and sister, but the friends who end up as “players” are never well fleshed out. The “dolls” – the moe mechs the children pilot – are given more robust personalities and characters, but even then there is too little to make them as compelling as the story promises.

Ultimately, this story needed twice the space it was given. With it, maybe plot and characters could have realized the potential seen in what is basically a witty, though odd, story. As is, it leaves something to be desired, though it will make for a good bit of eye-candy for Hajime fans.