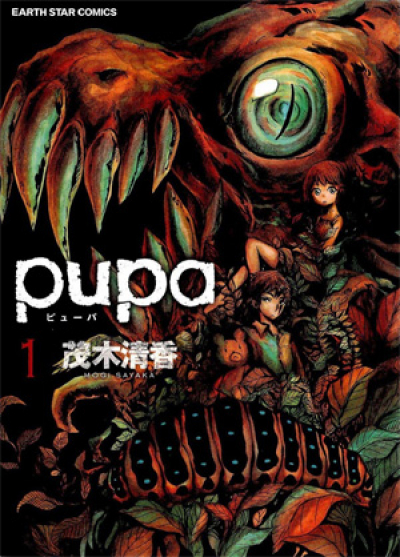 I rarely ever write reviews anymore due to having no free time, and definitely don't have time to write a full-fledged writeup of pros and cons - but Pupa was so disturbing that I feel compelled to at least write a warning to others.

I was first interested in Pupa when seeing the upcoming Winter anime list, as there's an anime adaptation airing soon. Horror? Check. Disturbing? Check. Anyone who knows me, knows I love me a good horror title, and try my best to read as many manga related to the genre as possible. It takes a lot, and I mean a lot, for me to be grossed out and disturbed by something.

Look, the story isn't bad - it's kind of interesting and at least it's somewhat unique. A girl gets randomly infected by a virus, there's a nefarious researcher who knows more than she lets on who offers to 'help', etc.

But really, Pupa pushes the line for gore and disturbing. Unless you like watching people slowly get eaten alive over and over, or someone getting vivisected while conscious/alive, I'd suggest looking the other way on this one. Hands down.

tl;dr: this is too disturbing even for me. :|

Where to even begin??

The plot was stretched so thin, and all the explanation was so vague that I'm not even sure the author understood how everything fit together. It was so seemingly random, that at some point it just felt like the mangaka and the editor must have just been throwing out every possible idea and said, "Why not?". The parts that did make sense were so tacky,and overplayed that I had next to no interest in it whatsoever. A lot of the parts that are explained, are also gross feeling (like, oh, let's say, a woman taking the sperm/eggs from two siblings and implanting it into her own body in order to force a child between them?).

The characters were dull, with each character having basically one thing about them. Utsutsu has an extreme sister complex. Yume is a monster. Their father is violent. Maria only cares about research & Hotoki literally gets off to his own sister. And that's essentially IT. There is absolutlely no character development worth noting, and no real intelligence or drive to any of their actions.

If I walk away remembering anything about this manga, it will only be how truly bad it was.

tldr: A nasty waste of time catering to people with sibling complexes while being disguised as a psychological manga.

Pupa started off kind of interesting. Then it turned into something that I... just can’t even describe. Honestly, I think it’s really bad.

The premise and description interested me, which is why I read it. It reminded me of Tokyo Ghoul, a manga that I genuinely enjoyed. The first few panels seemed promising, but as soon as that witch chick turned up, I was reminded of the crappy, cliche and awkward stories that I used to write when I was a 10 year old lil’ shit. It was written so terribly for the first few chapters that I was sat reading in awe about how crap it was. Absolutely nothing was flowing the way a decent manga should. Their abusive daddy just showed up out of nowhere, a random witch bitch appeared out of nowhere and told them about some shit, and then Yume’s real, monstrous form was gradually revealed after being bitten by a dog. It progressed so fast that I couldn’t remember the order of events, nor what was even occurring.

It is just so bad. I can’t describe it accurately with mere words, but if you read the manga you will understand. Reading it feels awkward and forced, almost cringeworthy. With every chapter I looked forward to something more interesting that was going to occur, but nothing ever did, other than the ending which I can safely say I really liked. The ending may be the only part of Pupa I liked. I will address this later.

The art is alright, but certainly not the best. It’s very scratchy and rough at times, although the physical character designs aren’t too bad. To put it simply, they’re better than what an average person could produce, but nowhere near as good as the art in something like Black Butler or Inuyashiki. It is detailed though, particularly towards the end when it gets rather graphic and... odd. The ability to even draw the weird and wonderful creatures in Pupa is something I can praise, regardless of whether or not I like the art overall.

Moving onto the characters. Damn, these two are unoriginal. How many sister complex dudes do we need before realising most of the audience or readers just think it’s plain weird? Okay, we get it, some strange people have a thing for little sisters, but this series takes the cake. Is it normal for a brother and sister to sit there completely naked eating eachother and being happy about it? No, it’s not, and already I’m gagging thinking of all the people in their parents’ basements fapping over this. This sister complex crap that prevails within anime and manga gives the rest of us fans a bad name, and is overall very off-putting for a series.

Utsutsu is so average it hurts. I have seen this kind of protagonist over and over and over and I haven’t even consumed all that much manga and anime. He’s just... so, so plain. You know the kind of guy I mean. Decent looking, has a little sister who he definitely doesn’t obsess over, has a dysfunctional family, has something randomly happen to him. He might even be more unoriginal than Kirito and that one guy from Eromanga Sensei. Yume’s a little better. She is, like her brother, rather plain, but she’s very sweet and as unenjoyable as it all was, I liked her. The characters just seemed far too stereotypical for them to be interesting at all, and I think unoriginal, overdone and overall crappy character design is one of Pupa’s biggest downfalls. While I don’t dislike them as people, I absolutely dislike them as characters who are part of a work of fiction.

The secondary and more minor characters did not fare better. I am no manga or anime expert but even someone as inexperienced as me knows that the very nasty father of the main characters and the witch lady are extremely poorly thought-out characters. They remind me of something from Re:Zero, and pretty much every other series involving either a dysfunctional family or fantasy world of sorts. There is just... no imagination, no originality, no real planning. I feel bad being harsh and critical, but it’s how I truly feel.

Would I recommend this? Absolutely not. It’s shit. :( Other than the twist about Yume being an exact genetic copy of Utsutsu’s mother, barely anything kept me interested. The description genuinely made this sound good to me. The manga lived up to zero of my expectations. I could not wait to finish it and I’m starting to wonder why I didn’t drop it, because this was a true waste of time. Don’t bother with this, people. I almost regret reading it because I got next to zero enjoyment out of it... other than the ending. The ending somehow made me feel something. As much as I hated this, the ending actually did something for me in a strange way. It’s quite bittersweet, and while it certainly isn’t innovative, it did something for me unlike the rest of the series. It may be the only thing I liked about Pupa.

This shit would be real good if it wouldn't make me so goddamn uncomfortable. I respect anyone and everyone that manages to endure through the gruesome art and depressing plot.

*I do not mean to undermine the existing review, I just wanted to add one of my own.*

Warning - this manga has high gore content, and it is not "cleverly censored". There is a reason this is listed for having "mature content". It is pretty disturbing, but truly interesting. If you're into gore style horror and a whirlwind plot that grows more complex as more is revealed as chapters pass - Pupa is something I recommend to you!

As the reader, you're introduced to the back story from the viewpoint of Utsutsu by way of adorable teddy bears in tragic scenes. You move on to Utsutsu and his "sister" going about their lives together without their parents... It is clear Utsutsu has a sister complex and Yume is very attached to Utsutsu as well, but in a way that's less incestual and more like a very loyal and loving dog.

Their father is a Yakuza, Shiro Onijima, whom people in the community fear greatly. Their mother is Sachiko Hasegawa, whom Shiro married when she became pregnant with their son at the age of 16. Their relationship becomes extremely violent when Shiro returns after a 5 year trip to see a SECOND child, whom he assumes was born of an affair, which is probably why he turned so hard towards his once cherished love.

One day, Utsutsu and Yume walk home from school and bump into a strange woman who warns them to "leave before the red butterflies come". Utsutsu then sees their father parked waiting for them - he has Yume go on ahead to the park without him...This is when tragedy strikes, or so it seems from Utsutsu's point of view...

I found the storyline intriguing, overall, but a little slow paced for my liking. I could have seen this series lasting a bit longer, or at the very least
I expected a lot more from it's anime adaption...
If you don't have a weak stomach - you may find this just as interesting as I did.

In closing I'd like to mention I'd be happy to explain
any confusing things in the back-story or overall.
*Good luck finding the "completed" series, it seems to have fallen
through the cracks - such a pitty.*
Stay Creepy,
~Krovyu

***SPOILER ALERT***
The incestual undertones, portrayed by Yume feasting on Utsutsu in a way that makes it seem as if it's an euphoric experience for him, are a little weirder than simple sibbling incest - Yume is a genetic copy of Utsutsu's mother Sachiko.
Yume did NOT get "infected" on that day in the park, she IS a Pupa and she simply
awakened and left her shell. Like a larva transforming into a butterfly.
Yume is a "monster" - she is not human.
The reason Sachiko gave her the name Yume was because the events that transpired after Utsutsu's birth surely had to have been some horrible nightmare, only a dream - right? Sachiko feared Yume would harm her precious Utsutsu and has a difficult time keeping her sanity due to various events that occur further proving Yume is a monster. Shiro thinks Yume is a bastard child and takes out his rage and feelings of betrayal out on Sachiko as well as the children. Perhaps the reason he even beat on Utsutsu was because of Yume's existence Shiro may have wondered if he was even his son either because surely she wasn't his daughter.
Sachiko is believed, by the duo, to have left with another man.
In reality, she finally lost her mind and remains in a hospital over a pupa research lab.
Shiro truly did abandon them, but in his own twisted way it is clear he still cared
about his wife and children. (It truly seemed like relief hit him when he heard ths story of how Yume came to exist, knowing his beloved had indeed been faithful. Maybe I was reading into things too much, and his facial expressions, but that's how I saw things.)