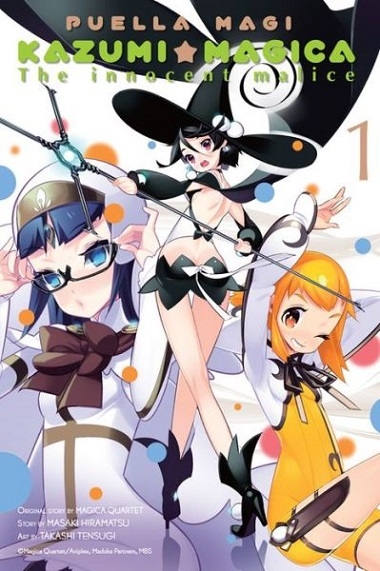 Oh boy.
I love Madoka Magica. I adore it to bits. I love that they take a rather ridiculous genre and treat it with class and seriousness.

Mahou Shoujo Kazumi Magica: The Innocent Malice feels like a bad fan-comic. An amnesiac girl named Kazumi is naked in a trunk and she tumbles out onto the lap of a grown man. Cue me rolling my eyes.

Madoka Magica had plenty of oppertunities to give people some fanservice and instead gives the Quartet more dignity than that. Then along comes Kazumi, naked, innocent, naive and her Puella Magi garb is just full of cleavage. It's almost as if Kazumi Magica were a parody of Madoka Magica by the girls from Komodo No Jikan.

Oh, and the whole thing about food! It's like they watched that one scene from Madoka Magica in the church and all they picked up was "Oh, Witches waste food!" WHAT?!

The characters are as forgettable to me as they are to Kazumi's amnesiac-ridden brain and the whole manga just seemed to miss the point of Madoka Magica.

The saddest thing though, is that there's probably a lot of potential here. I just don't care enough to find it.