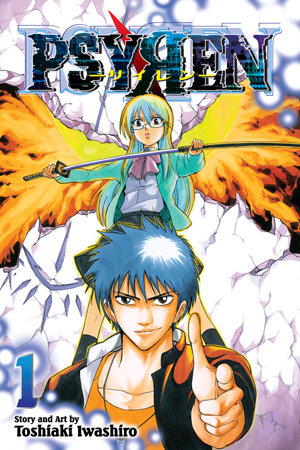 When high school student Ageha Yoshina finds a red calling card in an isolated, ringing pay phone, he believes he's merely stumbled upon the game 'Psyren', a curious urban legend. He initially intends to trade information about Psyren to the world's foremost fortune teller for a famous reward, but after his childhood friend Sakurako – who happened to possess one of the cards – disappears, Ageha rushes into the game's dangerous world to find him. Now trapped in a post-apocalyptic landscape and pursued by Psyren's deranged inhabitants, Ageha must fight to survive and unravel this world's mystery before the game takes his life.

Wow, what a manga! It's been a couple of years since I finished reading Psyren and it still remains one of my favorite series of all time. I've yet to read another manga (except for Fullmetal Alchemist) that can match the quality of this one. What I originally thought was going to be a strange, horror based manga ended up being incredibly well rounded and intriguing. Story Psyren is the story of a group of five teenagers, the centarl character being 16 year old Ageha Yoshina, who have been sucked into a post-apocalyptic survival game (either by choice or accident). They must travel across a ruined landscape to find a portal back home, fighting monsters and developing psychic powers along the way. I know, it sounds Hunger Games-y, but it loses that impression quickly. They later discover that the landscape is actually Japan in the year 2018 after the collison of a huge metoer that also caused numerous supernatual disasters. The "Psyren" game is actually orchestrated by a powerful psychic with hopes that the players will discover the grim truth about the future and work to prevent it in the present. With the fast paced switching between present, future, present, future, it sounds like a lot to handle, but is actually outlined very well. All the questions that the reader has in early chapters are often answered later (even though "later" is never a defined length of chapters). The more the characters discover about the future, the more eager the reader becomes with each instance of time travel. By the final arc, you're practically on the edge of your seat turning page after page to see what will happen.  While Psyren is one of the best science-fiction mangas out there, what will really make reading worth it is the relatoinsihp between Ageha and Ammamiya (a badass psychic warrior who's somewhere between Tsundere and Yandere). It's like the fictional couple you never knew you wanted together until it happened. Their relationship only gets stronger from volume to volume, to the point where you're saying "just kiss the girl arleady." Art Toshiaki Iwashiro creates the perfect art style for Psyren. It flows freely and seemlingly helps to drive the plot further. I honestly cannot imagine Psyren in any other artstyle, it works so well for this series. It takes alittle warming up to at first but gets better and better as the story progresses. I often use it as a standard to judge the artstyle of other manga by. It's that good. Characters Oh man, the characters. The CHARACTERS. So many lovable characters in Psyren. The main cast of five really only sticks together for the early story arcs, but there will be so many others to make up for it. Ageha's development as a person really surprised me. He goes from being a delinquent who's problems are often solved by throwing fists to a responsible young adult who understands the gravity of the situation and treats it accordingly. Of course, Ageha develops a little of what I like to call "main character syndrom" near the later arcs (is there a power cap on this guy?) but still manages to entertain and satisfy. Similar developments are seen in Ammamiya and Kabuto (my personal favorite character), as well as some other memebrs of the cast. One thing I noticed is that often one character would "die" early on and never really get any kind of attention until MUCH later. Specifically, Oboro Mochizuki. I mean, really? One of your best characters and you kill him off? (SPOILER: He's not dead. Yaaaayyyy) Anyway, what really hooked me were the Elwood children. They didn't seem like they would have much of a role in the present other than to be a helping hand whenever the main characters needed one, but it REALLY made me happy when they were revisited in the future with older versions of themselves. To see how much they had matured (or not) and developed surprised me. When I saw the older versoin of Kyle, I squealed a bit on the inside. I was literally that happy.  Overall If this manga isn't perfect, it sure is close. This is probably one of the most underated series in the anime/manga community, mainly because few take the time to read it. I really want to know why there isn't an anime yet. But Psyren is definitely worth your time.

Psyren is a 16 volume shonen manga that was serialized in Weekly Shonen Jump from 2007 to 2010, where it was sadly canceled. It is about a group of teenagers trying to stop the future from being destroyed Shonen action stories are generally about hype and fights, generally have a lack of truly major characters, and focus around a loose plot that exists solely to add in as many fights as possible. Shonen is my favorite genre, and I have read/seen 40+ of them, so I mean this as a pure summary of the tropes in the genre. Psyren, however, focuses on a deep, well written plot with great twists and a, while overpowered, somewhat new energy system. As someone that doesn’t care much for plot stories, Psyren’s plot and twists were good enough to make this manga one of my favorites. On top of that, volume 3 of Psyren has the single most shockingly badass moment I’ve seen in manga in a very, very long time. I’ve established that Psyren focuses more on plot than most shonen, and that it succeeds in that department. Though Psyren’s plot isn’t the only thing that sets it apart. The protagonist of Psyren, Ageha, is calm, somewhat smart, smooth, is the “sleek” kind of badass and a breathtaking character design. Most shonen mains are loud, screaming, comically stupid, food addicts with a death wish, who win every fight by powering up until everything dies. Ageha is a lot like Yusuke Urameshi. While Yusuke may be more memorable, Ageha seems like a more perfected version of the archetype. The series also has an amazing start, and morphs into something completely different, but just as good. The beginning of the series is a traditional seinen-shonen (A shonen type story but with blood and tragic backstories) that is more or less a really good version of the basic shonen I explained earlier. Around volume 5, it becomes apparent that Psyren is about it’s world and plot. This change eases you in to it’s unique style, while also giving some classic shonen greatness at the beginning.  The unique style isn’t only in the storytelling, but also in the fights. While some fights feel cluttered, and awkward, the way the main power, Psy, is presented, gets serious awesomeness points. Quick warning: Anyone who has not read up to volume 3 of this series should skip to the next paragraph, because I am going to talk about perfected shonen hype. The moment that I fell in love with Psyren was the first use of Melzez’ Door. Hiryu/Kuwabara is emotionally and physically broken. He’s torn by what happened to his friend, and his literally dying. Ageha, pulls out the coolest design I’ve ever seen for a shonen attack and says “Get away from my friend” in what I imagine to be Shirou’s most intense philosophical screaming voice. The way Ageha then slowly develops this power into something far more effective is satisfying as well. Psyren’s ending, from a pure plot standpoint, along with it’s epicness levels, is fantastic. It’s conclusive, HYPE, romantically satisfying, reasonable and overall a solid conclusion. I have no issues with the ending of Psyren ON PAPER. The problem is, it’s an 8+ volume arc shoved into 2 volumes. As I mentioned earlier, Psyren was cut short early, and forced to rush it’s finale. The amount of characters pre the last 3 volumes was manageable. Each of them was at least some what distinct, and got a good amount of screen time. They all had unique designs as well, which is a plus. But then the mangaka force introduces 10 characters who all have backstories and powers and it’s all shoved down your throat in the span of a single volume and it’s TOO MUCH! To add, the fights become so cluttered that I feel like I’m looking at a black page. The new designs are all the same, and GOD WHY IS EVERYONE SO STRONG?!?!?!?  While the final fight is absolutely stunning, the bazillion fights between random side characters kills me. It feels like there was such a good ending here and it just fell apart with the rushing of it. Even with all that, the style and storytelling of Psyren more than make up for it. I find Psyren to be criminally underrated, and in serious need of a 50 episode anime adaptation to make the pacing slower at the end, and make the fights less cluttered. And I just want it to get more exposure. It gets a rock solid 8.75 from me. I highly recommend it to people wanting a more unique take on the shonen formula, along with a great sense of style and surprisingly intense romance. If anyone has read it, I’d love to hear your thoughts. And if anyone reads it because of this post, then I’ve fulfilled my purpose in writing this.Here’s my MAL, Twitter, and VNDB. It’s Fullmetal Ghoul, and that’s all for today.

Psyren is one of my all time favorite mangas. I have read it at least three times and I never get bored of it. Highly recommend it! The plot of the manga is really well paced and it's a new take on a trope that has been done many times before (don't wanna give too much away :P). It's action packed but theres also romance (for those who don't only want romance). But the love-interest of the main character can fend for herself (which I highly appreciate). All in all awesome manga with awesome characters and plot. Go read it! :D 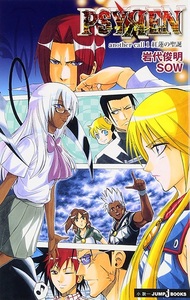