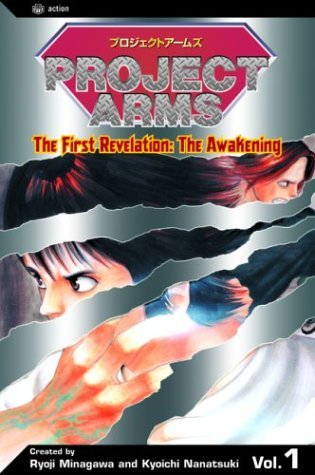 As someone who has seen the anime 1st before it's manga. It's an interesting read to see how the source material turned out. As well as more well presented and rich it was. Story: The initial set up is still the same, Ryo Takatsuki is a seemingly normal student who finds himself provoking the interest of new student Hayato Shingu, eventually leading to pursuing him to an abandoned building late at night when Ryo's childhood friend Katsumi Akagi went missing. During their fight, Katsumi ends up getting herself held at clawpoint by some meathead thug named Claw, who happens to be working for a secret organization known as the Egregori, and that Ryo and Hayato were set up against each other. Ryo during the fight eventually grows himself a nanomachine bioweapon out of his right arm during the fight while Hayato brandishes out his bladed left arm. After the encounter it leads to Ryo, Katsumi, and Hayato forming an alliance and finds themselves having to learn just what the heck are the Egregori and why does the guys have nanomachine limbs. Leading to a action packed tale of Scifi wonders as they must face various type of enemies such as Cyborgs, Child Soldiers and Prodigies, Mutants, Supersoldiers, Psychics, Clones, and exclusive to the manga, Prehistoric Animal Statues! However in the manga, there is actually one more story arc that happens after where the anime ended. Let alone some vital scenes that didn't make it into the anime (Season 1 was the 1st 77 Chapters out of 241, nearly 1/3 of content) which results in some plot holes, and even some minor differences. Characters: Characterization is the same here as in the anime. Ryo is a lowkey cinammon roll who must deal with his newfound power and befriending the other ARMS users while his relationship with Katsumi gets more complicated along the way. Hayato is still best boy, even if he sadly dosen't swear as much like he's Kaine from NieR, or have as much wonderfully weird and quotable dialogue like in the anime's english dub. Katsumi is the childhood love interest trope, though she is alot less boringly presented, especially towards the end. Takeshi Tomoe, who ends up joining the group shortly after the prologue actually has his character arc paying off later on here in the manga compared to the anime where most of his moments late in the story were adapted out. Kei Kurama, an ARMS user who gets introduced sometime later, is also pretty much presented the same, although her backstory on how she got her ARMS is different than in the anime. Other supporting characters are also pretty much the same as their anime counterparts. Along with some characters that were unfortunately not adapted into the anime, notably a blind mutant named James Huang. Visuals: The Main Cast has a more slender and more age appropiate designs (Most notably Ryo) compared to the the anime where they look like they are in their mid 20's despite being 17 yr old highschoolers. Another interesting detail is that certain characters, such as Takeshi are introuduced with not so flattering initial appearance character designs but over the course as we learn more about them and how they develop, their character design changes to a more flattering design, similar to how they look throughout the anime. Which I find to be interesting. Also it's more noticably bloodier and violent here in the manga compared to how toned down it was in the anime. Though it's not exactly over the top gorn to warrant an M Rating. Oh and it's also more consistantly well drawn when compared to the anime's infamous bipolar animation quality. lol Overall: The Original Manga Version of Project ARMS is a much more well presented (and less narmy) and more complete take of the story. With even a more satisfying and conclusive ending compared to how the anime ended. Not to mention the manga avoids constantly recapping itself to the point of absurdity like in the anime. 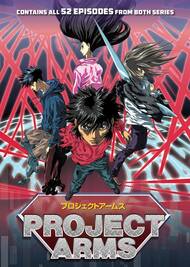 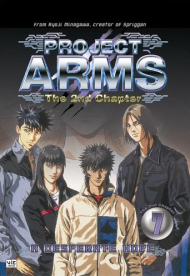