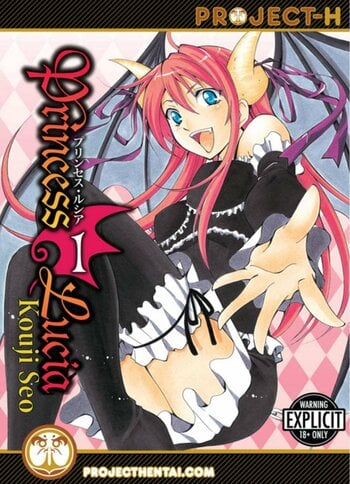 I personnal think the story brings up a good concept of "you may be born into evil but that doesn't mean you are". Overall I think the story derector could have worked on the charaters better. I mean if you've live for thousands of years you wont think like a sixteen year old.

That synpnosis was interesting to me not gonna lie I wanted to see what kinf of methods this demon princess would use to make this mating session happen considering she is a princess of the demon world must be pretty strange and fun to watch.

The demons and angels are noteably mediocore especially the demon princess and king.

For a thousand year old girl she sure acts like a teenager normally people would not even be able to stay sane in reality honestly but in most good manga living that long normally effects your personality at least a little bit that and you would have alot more knowledge.

This throws ALLLL of that out the the damn window the girls is mentally the age of the protagonist and despite her age she is a slight tsun tsun that has trouble with men.

When she meets the protgonist and the manage to get a sex positions she gets embarassed and slaps him after that She gets embarrased like a 15 year old girl and flys away.

If you wanted to get to know him first maybe you should not sneak into his house immdiately demanding sex that you know you are not ready for from a man you really don't know much about.

Lets also talk about the demon king here HE HAS BACK PAIN AND GOES TO THE HOSPITAL REGULARLY.

What is this crap also he apparently lost his lands to the angels for being generous? and he wants his daughter to make a baby with this guy because he has a 3 6 birthday.

Lets also talk about how the angels are they are able to experience memory loss by simply being glocked hard enough along with some of the demons.

This manga has some problems that made me faceplam