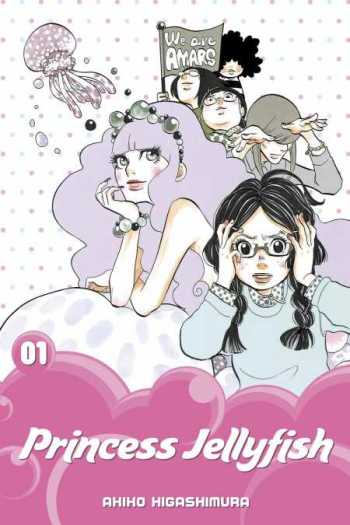 Princess Jellyfish is a cute comedic manga that centers around a group of otaku's and a fashionable character. They enter the world of fashion (some being against their will) and are thrown into a life that spirals out of control. It is a cute manga with mild romance but mostly just silly things that don't seem all too realistic. It's an over the top representation of how shy girls act. Though it may not be completely believable it's still super endearing and lovely to read.

It is a story about finding yourself in the midst of the crazy modern world. Embracing who you are and letting yourself blossom into the beautiful flower everyone knows is in there. While some characters have no development they are not meant to have it, they are mostly there as support or comedic relief. The story itself has no real life changing plot that will make you think. It's simply a cute manga with some adult humor tossed in. The second half of the story starts to go a bit off the rails but it still ends on a nice note that if not only funny but heart warming. There are things left untouched and it ends a bit oddly not closing all loose ends but it adds to the mystery. I would recommend it if you want to read 84 chapters of over the top comedy and adorableness. Also if you love jellyfishes and fashion.

This is a true example of what every shoujo manga should be, an excellent read or watch for males and females both. I truly recommend this manga and its anime both.

Forget about the world problems for a while and have some fun!