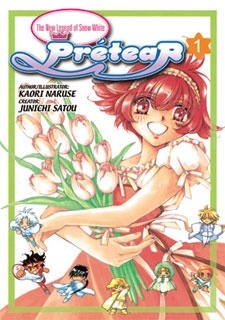 Remember the pretty stories of Snow White, Cinderella, and Sleeping Beauty, you think of a little damsel in need of rescuing. You rarely think of the damsel being the one able to help save the knight in shinning armor but that’s sort of the feeling about this. Such a pure and sweet little girl with a heart of gold; YA RIGHT! This little princess isn’t as pure as the story but she does have a small sad story to tell. With an alcoholic Dad who didn’t really bring money in with his books, she pretty much had to grow up fast and take care of herself. Now that she is a princess, she can’t stop acting like how she used to. Sadly, there are some things that the anime did much better then the manga and I will be getting into this a little.

The whole beginning of the story is a little bit odd and there are major differences that just made the anime seem to have more heart. Things like how the knights were working so hard to find the Pretear, the knight’s personalities, even the story about what happen with her stepmother’s ex father. All these things just seemed like they were not as heart warming to me where as the anime had more to it. The idea that the father would have passed away instead of just a divorce made the sister’s a bit more relatable for our heroine. With the father alive, it just feels a little bland. It was also really odd because unless it was a translation error, the first book had said they were divorced but then turned around in the 4th book and said that he had died. Also, we have the knights feeling a lot more carefree then I think they should be. It’s not like they weren’t in the anime but something just feels off. I tried to keep thinking of the manga as its own and yet… It was just not that interesting to me.

The parts I did like were that the mother seemed to have a bit more of a mean stepmother style instead of a lovey dovey woman but it was still a bit off. It seemed as though the mother just didn’t care about Himeno at all and only cared about her new husband. I also liked some parts near the end a little better then the anime but again, something just seemed to be missing to me. It’s not that the anime is better then the manga, they are about the same in that aspect. But the concept of the characters and the way they act just changes what I like. To me, the story didn’t exactly end the way I wanted to, preferring the cute ending in the anime then the manga.

The artwork was beautiful, bright colors when there was watercolor styled when it was colored and the rather delicate lines in the rest. They were expertly detailed and was a joy to look at even if the story lacked.

In the end, it was slightly bland though I liked some concepts. I prefer the anime then the manga as it was a bit shorter and easier to watch then read.