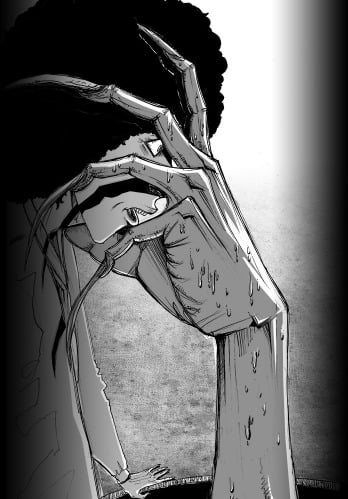 High-adrenaline, monster-slasher thriller. The story primarily centers around Shik, a husband who went into the sewers after feir pregnant wife got pulled in by a monster. But there's also a group of others who end up in the sewers with fem. They are isolated from the outside world and have to survive on their own. And that's a fine set-up for a horror story, but it becomes a lot less captivating once you realize that their isolation is completely avoidable and self-imposed. For me, these hidden failings became obvious with chapters 29 and 30. I then realized that there were so many tactics that Shik could've taken early on that would've helped fem achieve feir goal in a much safer and more efficient manner. Fe could've gotten a shotgun or somesuch immediately after learning there was more than just a single monster. Fe could've taken the head of one of the many, many monster corpses fe accumulated back to the surface as proof and then asked for police/military reinforcements. Fe obviously wasn't in that much of a rush if fe was able to explore and create a map and fe had access to the exit (at the time), which means that these plans aren't unreasonable in the slightest. Why would fe stay in this underground structure when fe was obviously underprepared? And when fe knew that fe was underprepared? Yes, it creates for a more intense, life-threatening plotline, but it makes no sense from Shik's perspective.

Dark-tinted art. The proportions are all off, with the shoulders too wide and the hands looking weird. It's very angular, to the point that even veins and tears are drawn to look jagged. The monsters have elongated teeth, like chopsticks but with squared crowns, and zipper-like spines. The layout of this underground structure isn't very clear (and the map doesn't much help).