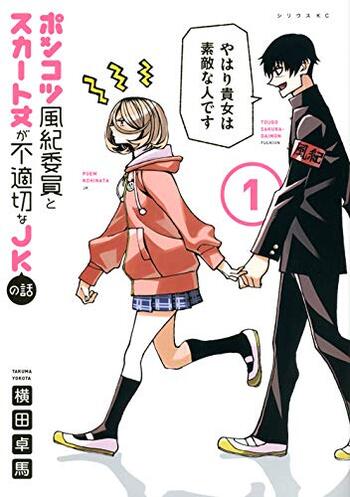 If you're looking for anime similar to Ponkotsu Fuukiin to Skirt Take ga Futekisetsu na JK no Hanashi, you might like these titles.

Now in his second year of middle school, Nishikata still tries to outplay Takagi, but continues to fail miserably at his quest to get even.

From classmates to brother and sister, living under the same roof. After his father’s remarriage, Asamura Yuuta ends up getting a new stepsister, coincidentally the number one beauty of the school year, Ayase Saki. Having learned important values when it comes to man-woman relationships through the previous ones of their parents, they promise each other not to be too close, not to be too opposing, and to merely keep a vague and comfortable distance. Standing on fairly equal ground, these two slowly learn the comfortable sensation of living together. Their relationship slowly evolves from being strangers the more the days pass. Eventually, this could end up in a story about love for all we know.

Kids say the darndest things, and in Moyako's opinion, her brother says the strangest things of all! An innocent childhood declaration that he'd one day marry her has convinced Moyako that her brother will grow up to be a total perv, and now she reads the worst into their every interaction. Surely it's a big sister's job to rehabilitate her little brother, right? Only Moyako might not be up to the task, because she's the one turning otherwise innocent situations into perverted scenarios!

The protagonist, Naoya, is a first-year in high school. He asks out Saki, a girl he has been in love with, and she agrees to be his girlfriend. He's currently on cloud nine. But then, a beautiful girl named Nagisa comes up to Naoya one day and tells him that she wants to go out with him. Naoya feels himself wavering because Nagisa is such a good girl, and he comes to a decision! A new kind of romcom from a rather unexpected decision is about to begin!