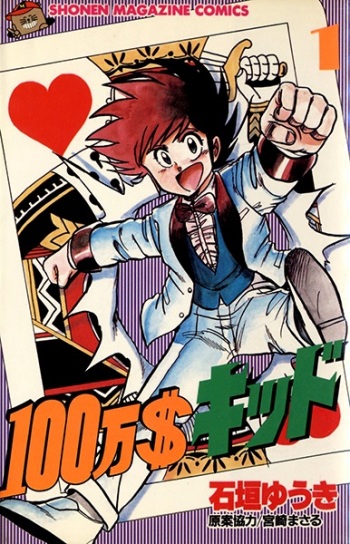 In the year 1947, the people of Shinjuku are down on their luck. With little money to buy food or necessities, some resort to gambling in order to survive. Traveling Tetsuya chooses to spend his time at Mahjong parlors where he is wiping the floor clean with his adversaries. However, Tetsuya meets the intensely-skilled Boushu-san, this is when he realizes that his skills are still lacking.

Two guys up against the big city have only one thing on their minds. Sex? No. Sports? No. Then it's got to be the flashing lights, pulsing sounds, and high-stakes strategies that make up the world of pachinko, the gambling craze of Asia! There are a few real methods to make the game work in your favor, and Takeshi Imada knows all of them. For Takeshi, the symbols line up, the limits are high and the payoffs come in buckets - but will he ever find a girl?

The Godlike Gambler ARIMARIA: Once Upon a Time

Japan: the Gambler's Paradise! The rich and beautiful Maria is well-known as a legendary gambler who will take on any challenge, no matter how unreasonable or impossible! But what happens when she meets a lowly slave who solves her riddle..? Twist after twist! So tense you'll forget to breathe!

In 1876, young Takanosuke Arashi is sent by the Edo government to deliver a top-secret message to the United States of America. When his ship is waylaid by pirates, Takanosuke is cast adrift with an eclectic group of passengers, including a dog with four names, and part of a treasure map. Then begins an adventure that will take Rakanosuke around the world, from the wild-west, to old Morocco, to Baghdad. Who will get their hands on Napoleon's treasure first?

Katagiri Yuuji is a divorced, single, lazy gambling addict whose only real activity is playing Pachinko. He does it well enough to get by, but his life is more or less empty... until a young girl named Miura Satomi appears, who is a big fan of his.

Mingchao lives in the good-old American West with her grandfather--and her Hollywood dreams. After her grandfather dies, he leaves her a strange gun known as the Eto-gun that has mystical powers linked to zodiac animals. She decides to pack up and take aim at her goal of stardom. On the road to tinsel town, she learns about another gun called Zodiac, which is Eto's twin. The two firearms share a powerful connection, and an underground organization will stop at nothing to lock and load on the guns' secrets...

Cactus Sam is just your regular, ordinary cowboy, but give him just a sip of milk and transforms from a calm, congenial fellow, into the rootin-est, tootin-est, two-gun shootin-est cowpoke you ever did see... And it just so happens his parents own the local "Milk-Hall". Join "Cactus" on his adventures, as he makes some new friends and battles unsavoury characters across the Old West - with his trusty six-shooter in one hand, and a nice, ice-cold cold, glass of milk in the other.