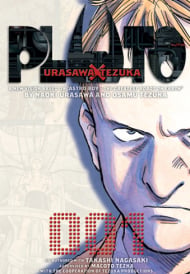 The world is stunned when one of the seven greatest robots on earth, the universally beloved Mont Blanc, is found murdered with his head desecrated with makeshift horns. To confound the situation, the renowned robot rights activist Bernard Lanke is also killed and mutilated in a similar manner. Eager to solve these puzzles, Europol German Division employs the help of detective Gesicht, an advanced robot who has cracked some of the most difficult cases known to man. But no sooner has Gesicht received his orders when the robot North No. 2 meets his end along with the creator of the international robot laws, Junichiro Tasaki. While society struggles to come to terms with these incredible events, one thing becomes clear to Gesicht: someone is targeting all of the world’s most powerful robots and it is only a matter of time before they get to him…

You know, I really wish that for all the works made by Naoki Urasawa that are reviewed, they would simply say: "Made by Naoki Urasawa. Stop reading this and go read/watch -manga/anime being reviewed-". But alas, sometimes one thinks they need more of a reason than the series being completely awesome or the creator being as equally awesome. Then again, it wouldn't fill the reader's noggin with praise for said works. And then again, they shouldn't need to be told that he's awesome. They should know it. Oh well, lets begin. To start off, it uses an arc that appears in Astroboy and makes it it's own, with plenty of the characters seen there appearing here. This includes the title character Astroboy, Dr. Ochanomizu, Dr. Tenma (No relation to the surgeon) and a few others. It doesn't just slap the characters in for the heck of it, it brings them into the story and makes it feel like they belong there; that they aren't simply there to appeal to the Astroboy fans. Since there's no synopsis at the time of the review, I suppose I have to give out a bit of the story, as spoiler free as possible. And don't worry, it's all in the first volume. It's essentially a murder mystery, as it starts off with Montblanc, one of the seven most advanced robots (Out of all of them) in the world, found dead, torn to pieces. Detective Gesicht, another one of the seven, is tasked to find the murderer of Montblanc, but it goes far beyond destroying a world-renowned robot, as a human who worked for the Robot Law Protection Society is found dead as well. Both are connected with two large horn shaped... objects (Varies) found near their head. And to be fair, that's all in the first chapter. It gets worse, as the body count rises and pieces of the puzzle come into play, it's a race against time to find out who is commiting the murders of both robots and humans alike. That last part sounds a bit cheesy, but the story is far from. It's not as slow-paced as Monster but it nearly tells a great of a tale with it's own twists and turns and surprises throughout. The artwork is Urasawa's usual style, which means that it looks good, suits the manga perfectly and is serious. But a few characters do look like others that appeared in his other works, most notably Epsilon, in relation to that certain devilish mastermind Johan. Nevertheless, it gets the job done and it does it well. I can't really say much else apart from mentioning again that it works in bringing it together. Characters are the same in other manga of his in terms of how amazing they are. Robots that can act like humans, that can appear to feel emotions and at times can make the reader forget they're robots. That right there is what makes the characters here shine (The robots at least). To make robots that look, feel, act and overall overpower what they originally are. But that's not to say that the humans fail in comparison to them, as even some characters that are only in a small handful of chapters are fleshed out, which is a pleasant surprise, and that they play a decent role in the plot makes it all the more amazing. Almost like Monster in a sense, where nearly every minor character has a role to play that relates to the plot or further enhances certain themes. Pretty much all of the seven (Most advanced robots) have some backstory to them, or at least a bit about them. Some might not have much (Montblanc for one), but others are quite nicely fleshed out (Even Astroboy, which is a great touch). Overall, some characters aren't as fleshed out as others but that's made up for the main characters and the ones brought over from the source material, and those which I must say again, aren't wasted and fit the story like a glove. This series needs to be read more, by far. Not simply because it's based off a universe by the godfather of manga or created by a legend, but because it by itself is a true work of art. It's an amazing tale of mystery with great characters and an even better story. If this were an anime it would probably be pretty long and be obscenely faithful to the manga, but with a manga this good, that would be the biggest compliment it could get. If you gotten this far, start reading it immediately. 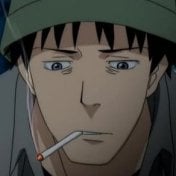 Enter Urasawa Naoki, author of many classic manga, and one of my favorite mangaka. Now what happens when you cross God of Manga Tezuka Osamu, and Urasawa Naoki? You get the gritty, realistic portrayel of Tetsuwan Atomu's (Astro Boy) World's Strongest Robot Arc, boldly reinvisioned as the manga Pluto. I will admit, I know barely anything about Astro Boy but when applying it to Pluto, you don't really need anything more than the most common background knowledge. It's the future. There are robots everywhere. That is the world of Pluto. There is a force after the world's 7 strongest robots, and it has spun into a serial murder case, starting with the death of a beloved swiss robot known as Montblanc. The news spreads across the world and into the data banks of German Europol Robot Gesicht, who is the main character of this story. Living hapilly in Dusseldorf with his robotic wife, Helena, Gesicht is saddened by the death of Montblanc, and decides to take his wife on a vacation. But before that can happen, a human murder occurs and Gesicht notices a similarity.. both Montblanc and the human's remains have been set up to look like their corpses have horns. This bothers Gesicht and leads him down the road of investigation.  But as in traditional Urasawa works, every single character is as compelling as the lead, infact as I was reading Pluto I felt that many of the side characters could be taken out of Pluto and given their own story, stories I would definatly read, so don't worry about being bored with Gesicht's own story with all the other remarkable characters.Montblanc, Gesicht, Brando, North Mk II, Atom, Heracles, Epsilon, the world's seven strongest robots are being hunted down and Gesicht has to find the killer before none of their kind are left. The culprit is a gigantic creature that is able to control the elements, create life-and destroy it. Able to summon tornadoes from nothing, all these traits leave one to believe this creature is truly indestructable. At times I had marveled at the sheer brilliance and terror than was Pluto, each panel where the 'monster' appeared had breathtaking art that truly proves Urasawa is a cut above other Mangaka in terms of pure skill, and at times the giant robot provided what I thought 20th Century Boys lacked with its giant robot presentation. As much as I love the art, I noticed a slight trend in Urasawa's illustrations.. some characters are quite similar to others.. anyone notice Epsilon's similarity to Johann, the antagonist of Urasawa's previous hit, Monster? Even if a small fraction of his characters look similar, he still does an amazing job of creating new designs and reimagining old ones.To summarize, Pluto is a deep, involving mystery from the minds of Tezuka Osamu and Urasawa Naoki, a match made in heaven for this realistic spin on one of manga's humble beginings. I was not disapointed in the least, and neither will you be when you flip to the last page of this wonderful story.

magnificent, captivating ... you will not be able to stop reading. It lives up to any great work about robots and humans, but has the added bonus of wonderful art and how the story speaks through the panels. 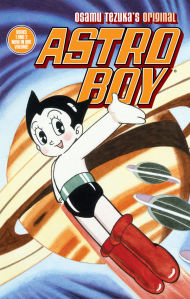