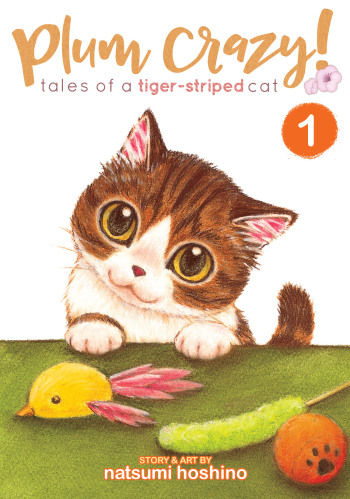 If you're looking for anime similar to Plum Crazy! Tales of A Tiger-Striped Cat, you might like these titles.

The story of Mikazuki Subaru, a novelist who is shy and struggles in relationships with other people, and a cat who was dumped by humans and lived a tough life on the streets. Through a twist of fate, the two of them end up living together. This heartwarming tale illustrates day-to-day life through the eyes of both man and cat. These moments seem trivial, but as they build upon themselves, the two become family and find happiness in their life together.

One day when Father is adjusting the new collar that he bought for Chi, the young feline gets bored and decides to go for a walk. As she arrives at the park, Chi decides to find a nice spot and claim it for herself, but with children tossing sand around and dogs getting in the way, it doesn’t prove to be easy. However, when she finally does find a nice place to have fun, Chi meets another small cat named Kocchi and attempts to play with him, even though he’s more interested in scaring her away…

One day, a young kitten was on a walk with her mother and siblings; but soon she became separated from her kin. Struggling to find her way home, the kitten soon ran into a young boy named Yohei and his mother; and out of pity, the duo takes the kitten home with them. Unfortunately they discover that they are unable to keep pets in their home, and thus begin a quest to find her a new place to live. From playing with shoelaces to being washed, the cute kitten named Chi will have fun and get to know her new family – though all she really wants is to make it home to her feline mother.

Chi is living happily with Youhei while his parents continue to try and keep her presence a secret from the landlady. So when a relative in Hokkaido offers to take her in, Youhei's parents decide that it would be best for Chi if she moved away. Now with just a month left with the young kitten, they are finding it difficult to say goodbye. Then, when they receive a phone call saying that Chi will be moving away sooner than expected, Youhei and his parents realize that they can't give her up. Deciding once and for all that Chi is part of their family Youhei's parents promptly find a new place to live - one that allows pets. As the family prepares to move into their new apartment, will Chi be able to adapt to her new surroundings?