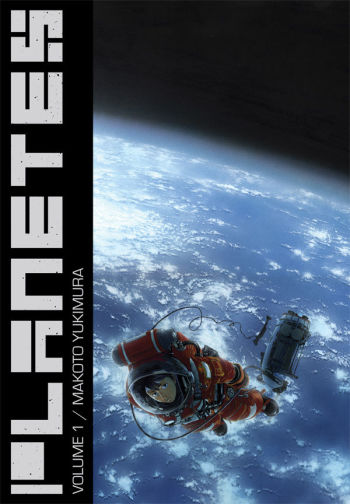 The art, and faces especially, started out kinda bad. But over time, it either got better or I just got used to it. Hachimaki's hair turns from blonde to black between chapters two and three. The character arcs are probably the best part of this manga, with several of the characters having fleshed out backstories and going through emotional breakthroughs. Hachimaki is, in many ways, the central character and fe goes through several drastic changes in personality and values. Each chapter, especially in the beginning, is largely episodic in nature. They cover various aspects of what life in space and on moon outposts is like, with an emphasis on the spirituality of space. There is the tension between those who want to push for further expansion into space and those who want to preserve the spacial environment, with some terrorist bombings. We see how the push for further expansions into space is hugely motivated by seeking sources for Helium-3, a real-life isotope that can be used in nuclear fusion and is found on the moon and Jupiter among other places. A big event in the story involves the first mission to Jupiter. The threat of the accumulation of debris around our planet, the danger debris poses to spaceships, and the self-replicating and expanding nature of debris (i.e. the Kessler Syndrome) are all central ideas. As is love and compassion.

Makoto Yukimura delivers a strong performance in his first major work in a rather down-to-earth sci-fi story covering the lives of garbagemen IN SPACE.

There's relatively little plot here, at least in the sense of big, overarcing events that the cast reacts to. The lives of the characters take center stage. That's not to say there are no developments or ongoing storylines, it's just that events don't drive this series but rather the characters do. There is a strong recurring theme of what the social, political, and personal ramifications of humanity starting to truly take its first steps away from earth and into the wider universe might be that gives this story some intellectual heft.

Yukimura has a clear track record of doing richly detailed, highly researched art in his works and Planetes is no different. It never quite reaches the jaw-dropping heights his later manga Vinland Saga has been able to scale, but man if it doesn't look good. He also displays his habit of largely using square and rectangle panels clearly separated by white space- perhaps not the most expirimental page setup in comics history, but it does make it easy to follow along. The high attention to detail really sells the realism that this series goes for in its writing.

The cornerstone of this excellent work. What kind of person would truly wish to devote themselves to space, particularly the incredibly risky path of space exploration? The ecentrics, the fanatically driven, the wide-eyed idealists, and- perhpas the most strange of all- a handful of surprisingly normal people. A theme of human connection runs through this cast as they head out into the unfathomable vastness of the universe- how much of it should or must be sacrificed to push humanity forward? The conclusions Yukimura reaches here aren't quite as coherent or polished as he would reach in his later Viking epic, but this is a shorter and younger work so I can't hold that against Planetes too much. As the story goes from arc to arc most characters not named Hachimaki tend to see their importance and screen time fluctuate significantly, Yuri suffering from this trend the most. Distinct and believable, Yukimura shows from the begining that he has solid grasp of how to write characters.


I came to this series because of my love (and probably a bit of fanboy obsession) for Yukimura's ongoing Vinland Saga, and I found it thoroughly enjoyable to see where my favorite mangaka came from and to look for early examples of his later trends. Fans of sci-fi need to read this series at least once, and not just manga sci-fi fans, as this series has the potential to be accessible even to people outside the Otaku bubble.