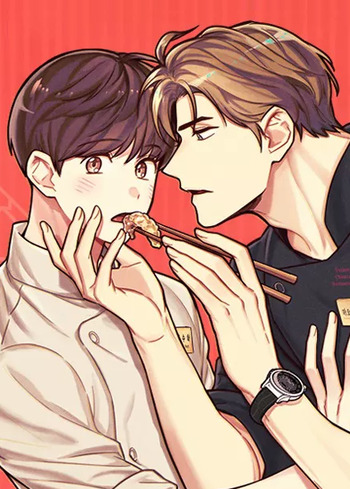 Not gonna lie, I actually thought this manwha was pretty good. Before I even finished reading the first chapter, I was expecting it to be something like an omegaverse where each character obsessed over finding the perfect partner to spend the rest of their lives with. Fortunately, though, it wasn't as intense or dramatic as an omegaverse, and the concept was way more subtle. I really appreciated that the characters weren't segregated because of it (looking at you, omegaverse).

There were some parts, I must mention, that strayed a little too far from the storyline. Obviously, for a BL, you would expect some sex scenes, or even just some slightly lewd scenes, but there are times when they become unecessary. Too many sex scenes in a row can make the story feel like it's dragging on too much, and Pian Pian was just barely sitting on the edge of that. I guess what saved it was the originality of the whole thing, so job well done.

I have to admit, as an artist, I sometimes stop to observe the illustrations in books I read to get a better idea of how anatomy works, especially in BLs. As I was reading Pian Pian, I noticed that the art was actually pretty impressive. The illustrator definitely has a gift for atmosphere and shading, which made my eyes happy the entire time I was reading. I was also glad to see that the smaller characters didn't look like they were starved half to death in a small room with no sunlight for three years. Probably some of the best artwork I've ever seen, so kudos to you, Haesin Young.

The characters weren't anything special, very stereotypical, but I did like how the author brought out their personalities so much. Because of that, I was easily able to correctly identify which of the love interests was top and which was bottom, even if they both looked like tops (AHEM, Sahyeon and Hanbin). Overall, the character designs were pretty well done and each of them looked different from one another. The hate this manhwa gets for its characters is definitely undeserved.

With all that said, Pian Pian is certainly underrated. It's a nice break from reality and a little taste of something new. Reading it was worth my time, and I'm confident that others will think the same.

Does anyone know where to read this for free by any chance? I am dying to read this and I can't find any websites aside from Lezhin

Thou there isn't much to the story, each chapter makes us anticipate for more.

The characters were written well and there were twists here and there but not too many that bores us but small twists.

There were more characters introduced in the chapter but they didn't make it go Ito much. I don't say it's perfect but it was a story that I could not take my eyes of until I complete each chapter the moment it was uploaded.

This story was much better than I expected, But this is my opinion - you'll have to read it yourself to know more.

I liked it so far . Somehow I like food related one's also . It was good read ,plot was also good . Sooha is so cute and innocent. And calix was also hot.(hohoho)