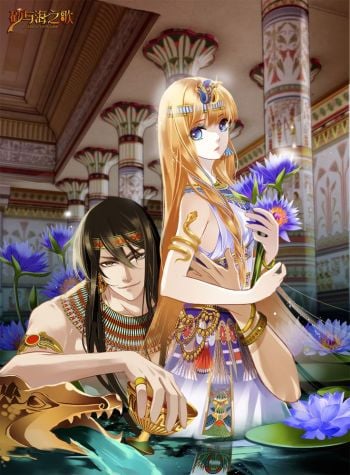 The Dreams of Jinsha

Xiao Long was whisked back over 3,000 years into the past and ends up in an ancient kingdom known as Jinsha.

Shouko Azuma is a high school girl living in Chiba prefecture. When worrying about her future and college at a riverbank, her phone strap becomes hot with a mysterious light, forcing her to drop it and the cell phone into the water. From where the phone fell, a light from the river sucks her in, and she is sucked into the world of the classic story, Tenpou Suidoken. There, she meets the handsome Sasagawa no Shigezou.

Ayaka is a typical twelve-year-old girl who takes her comfortable city life for granted, brushing off her grandmother's tales of World War II. On a day like any other, the girl begrudgingly takes her dog Ryan for a walk when she's forced to flee into a telephone booth to take refuge from a sudden storm – and that's when it happens. Lightning strikes, teleporting her and Ryan sixty years into the past, several days before Tokyo was bombed and 100,000 people lost their lives. Stranded from everyone she knows and the comforts of home, Ayaka must struggle to survive amidst the hardships of war, all the while trying to find a way home.

Tsukishima Yui and 5 other girls were summoned into the Edo period by a mysterious stones and each one of them had a power to protect people from evil and yui's power were ''words'' her hope-giving kind words.

Three people from the future are spiritually sent back in time to relive the era of Caesar, Marc Anthony and Cleopatra. As close companions to these key historical figures, they seek to understand the nature of an enemy's plan in their own time.