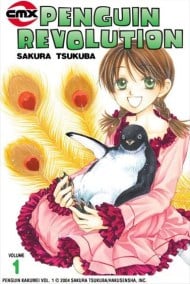 When Fujimaru's father's business fails he runs away once more and leaves Fujimara on her own to sleep in the park. However, Fujimaru's luck changes when she saves the beautiful vice president of the student council from a guy, only to find out that the vice president is male and cross-dressing as a girl. Ryou works for Peacock, a showbiz company, and it's company policy for their actors to disguise themselves for everyday life. Ryou offers Fujimaru a job as his manager because he needs help getting work, and thus Fujimaru must disguise herself as a boy from henceforth. Can Fujimaru fulfill her obligations, defend Ryou, and keep their secrets safe at the same time?

The hole plot of the sory was promessing from the very begining, I liked how the center of the story and it's focus remained throughout the manga. However, romance aspect in the manga was lacking, from my point of view, and the ending was not as satisfying as I thought it would be.