Alt title: The Healer who Was Banished From His Party, Is, In Fact, The Strongest (Light Novel) 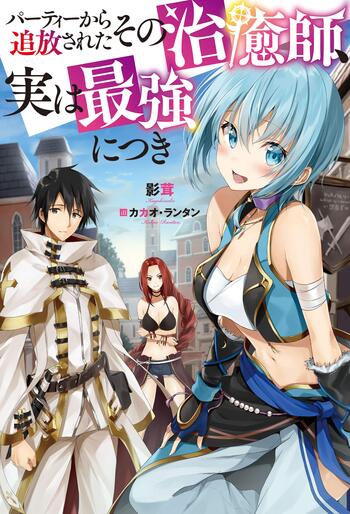 If you're looking for manga similar to Party kara Tsuihou Sareta Sono Chiyushi, Jitsu wa Saikyou Nitsuki (Light Novel), you might like these titles.

After the mercenary group he had been part of was utterly destroyed, Loren, who survived the disaster, decided to walk the adventurer's path as a way to make a living. However, for Loren who had no acquaintances and nothing but an empty pocket on him, receiving a single quest seemed like a faraway goal. So, as he was contemplating about what he should do next, another adventurer called out to him.

The hero’s party was attacked by a large group of powerful devils. The party will no doubt be annihilated if this were to go on. One member of the party, the strongest mage, Rakku, decided to stop the enemies in their tracks.

Fate Barbatos has never tasted real power. Born with the magical skill Gluttony, he constantly hungers in a way that can't be satiated, and has been shunned and looked down upon his entire life. One day, while working as a gatekeeper for a noble family and fighting a trespassing thief, he discovers Gluttony's true power: when he kills someone, he devours their skills and feeds his gnawing hunger at last. In that grisly realization, Fate is awakened to his true potential. How many lives will he feed on to satisfy this hunger, and is the world ready for the frightening warrior he'll become?

Gaius Balderus has led a storied life. From humble beginnings, he made a name for himself as fearsome warrior, a renowned general, adviser to kings and paramour to princesses. Gaius’s very presence commands respect and fear, so much so that everyone is too afraid of him to allow him to reveal his softer side. Gaius gives up everything and finds a chance to start again on the frontier of human civilization, where humans and monsters alike scrabble for existence in a hostile forest. When he runs into a tribe of kobolds, small furry creatures who are fleeing from human aggression, they immediately distrust him and everything about him. Can this gentle giant of a man come to peace with his past and win the friendship of the adorable kobolds?

As a boy raised by gods—the laws of the world don’t apply to him! Will was abandoned as a baby on the mountain where the gods lived. Being trained by the gods of swordsmanship, healing and magic, Will gained the strongest ability that even surprised them—. The world-changing journey of the child raised by gods starts now!

Lud was known as the strongest tank in history, and he served in the Hero’s party as a tank carrying an enormous shield. However, when the Hero, Kiglas became irritated from being unable to progress through the dungeon as he hoped, he disparaged Lud as a burden with only stamina and chased him out of the party. Thinking of returning to his village to meet his beloved sister, Lud was travelling when he came across a girl who was being chased by a monster and saved her. The girl held the rare “Appraisal” skill, and when he requested for her to appraise him, the skill which he thought was useless so far was actually an incredibly powerful skill. With his great stamina and that skill, Lud brandish his power as the strongest tank—.

Kanami, a young man that strayed into another world and suddenly awoke in a dark corridor is nearly killed by a demon and humans. Then preferring to use the status and skill systems Kanami aims for the deepest part of the Labyrinth. The skill [ confused ] consumes his emotions, and he befriends some unusual people, but while his spirit wanes in the other world’s Labyrinth he refuses to give up on returning to his original world