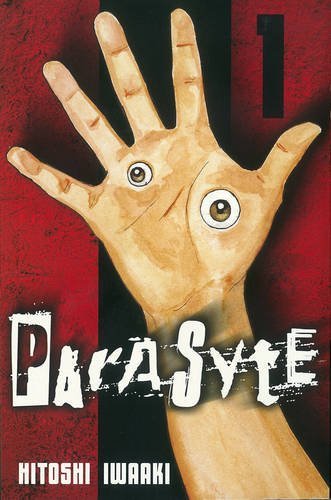 The main character has to overcome so many things and problems regarding  himself the world and the aliens. I really loved the way the author connected with the death of a mother or the link you create with a parent. Found it really "grown" without being pompous.

If somebody asked me what my favorite manga was, I wouldn't be able to give them a definitive answer, but Parasyte would definitely be part of the conversation. I absolutely love this manga. It delves into the nature of morality while also having amazing fight scenes. The fights not only have interesting choreography and tactics, but also have very believable motives (which isn't actually an impression I get from many fighting manga). The parasites have an obvious motive to fight Shinichi since fe's a potential threat to their survival. Meanwhile, Shinichi is often backed into a corner and forced to fight, but fe also has very personal reasons for wanted revenge against the parasites. I guess I should mention that the parasites were designed to embed themselves inside human brains and then turn the entire head into a moldable putty which they can shapeshift and even turn into weapons. And they have the innate urge to eat others of the same species as their host--in other words, humans. The parasite which entered Shinichi ended up inhabiting feir right arm instead since it couldn't get to feir brain, so it (later named Migi) has to cooperate with Shinichi. Parasites are largely indistinguishable from other humans, but they can sense other parasites when they get within 300 meters or so from each other.

I love quite a few of the characters. Migi's heartless rationalism is great. Shinichi changes over time and it's interesting seeing fem struggle with what it means to be human. Kana is adorable and is possibly my favorite human character. And Tamiya/Tamura is possibly my favorite parasite character (though Migi's great too), since fe dives deep into the meaning of existence and philosophical thought. Hayase is pretty cute and I enjoyed feir brief story arc (though it definitely wasn't as short as Akemi's). Likewise, Mitsuo and Nagai are both very engaging side characters in their own ways. And finally, Goto is a super cool final boss, though I'm still a bit ambivalent on how that final fight scene played out.

Earlier I mentioned morality. The manga largely focuses on the tension between morals based on sentimentality versus morals based on pragmatism. It's seen as more "human" to base decisions on sentiment and peer pressure, caving in to things like shame. And the parasites are meant to portray the pragmatic type of morality, making all decisions on what best accomplishes their goals. But what's really interesting, and what I love, is how the manga shows the parasites changing their moral code over time, and becoming more nuanced. We are shown that even a purely pragmatic moral code can come to the same conclusions as a sentimental one (e.g. don't kill people, etc.). We are also shown, largely through Tamura Reiko, that "survival" doesn't have to be the only goal which a pragmatist can aim for. And when they prioritize and value other things, perhaps even more than their own lives, then we can see how a pragmatic moral code can even more closely align with a sentimental one. I love this because I don't personally think that there is an objective moral code out there and I think that discussions about why things should and shouldn't be done are much healthier than people simply saying "This is wrong" based on a gut feeling, so any manga that encourages thoughtfulness is a good thing.

The biggest problem with the manga is the author trying to shame and guilt trip the readers into caring about the environment. It most blatantly happens toward the beginning, but remnants of this noble misanthropy and the implication that all life is inherently valuable can be seen throughout the manga. The first few pages are the type of "edgy" environmentalist dramaticism a middle schooler might come up with. And when Migi calls humans the real demons, that can only be seen as the author's preachiness since what counts as "demonic" is a value judgment based on subjective moral codes--something which feels out of place with Migi's normal detached rationalism. That said, in the last few chapters, this Earth-centric idea is eventually rejected by the main characters of the manga when Shinichi thinks to femself, "There's no point in using the standards of humanity to look down on ourselves" (pointing out the irony of calling humans anthropocentric or arrogant because they're not living up to a human ethical standard of caring about the environment).

Also, for what it's worth, the parasites aren't aliens, so this manga shouldn't be given the "Alien" tag. The origins of the parasites are never explicitly revealed, but they are heavily implied (in the opening of the manga) to have been a creation of an environmentalist who saw humanity as a plague on the Earth in need of a population reduction. The author even confirms this in one of the responses to fan-mail written in between the chapters (between chapters 38 and 39 in volume 5), saying "they were intended to have been created somewhere on the Earth. But since they did fall out of the sky, I can see why people thought that [they came from outer space]...but they were just being carried by the wind. When I thought them up, I decided they should be carried like dandelion seeds."