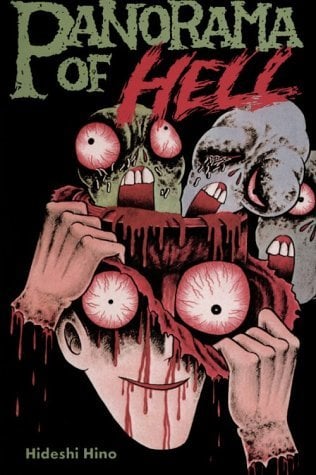 Believe it or not, the moral of this story is about the dangers of nuclear weapons (with the mad narrator promising that the undrawn and unseen "Panorama of the Final Hell" will be depicting the mass gore from the nuclear armageddon fe is attempting to summon). Though it's likely that topic was only included because the author recognized it as an evocative and fear-inducing topic. The entire thing is just a series of attempts to evoke visceral responses, like disgust or distaste. While there is some slight overlap between the author and the narrator--because some of the details are semi-autobiographical--it is important to point out the distinctions between the two. The narrator is an insane painter who enters states of ecstasy when blood, domestic abuse, and gross licking are involved. The author, on the other hand, is just an edgelord who likes the edgy edginess of drawing the macabre.

The overarching connective tissue within the manga is that this narrator is describing the various paintings of hell which fe's drawn. Then between the scenes of the narrator, we get short stories which certain (unseen) paintings are supposedly based off of. This premise would've actually worked better if we saw the paintings either before or after the stories, since stories are obviously not paintings (and the current portrayal is conflating the two). The first series of stories are dealing with the neighborhood and area around the painter's house--the guillotine, river, crematorium, graveyard, and tavern. Then the stories start transitioning into focusing on the painter's family history--with stories about feir children, wife, grandfather, father, brother, mother, and even femself when fe was a child. This second section is where some of the semi-autobiographical details come in, and it's not exactly clear how much of it is inspired by real life experiences or how much is just edgy edginess. Like, I don't know whether the author's family actually had a history of gambling addiction and domestic abuse or not. Either way though, it's definitely exaggerated to the extreme.

The gore and pus and blood and everything could be drawn way, way better (specifically, more realistically). The artist uses bulbous, mismatched eyes and weirdly flowing greasy hair.

How much do you like over the top gore for no clearly definied reason? Well, unless your answer is 'it's the best thing in the world!' I would reccomend staying away from this, because that's just about all this series has to offer.

The series focuses on an insane artist and his family. He has an obsession with painting with blood, but instead of being a sensible psycopath and getting some animals or people to drain of blood, he uses his own blood. I mean, surely it's kinda hard to paint with a gaping wound, no matter how crazy you are? Anyway, basically anyone and everything around him has a similar level of sanity, so obviously things get a bit crazy. Only, it's not particularly anything original, or anything I haven't read before, and I'm not even a particularly big fan of the genre. With the childish art, it's not like the gore is even that gross.

If you like crazy, over the top gore and characters, you'd probably actually really enjoy this. It's definitley not original, but I'm sure you'd find it enjoyable anyway. If not, then I'd recommend avoiding this.