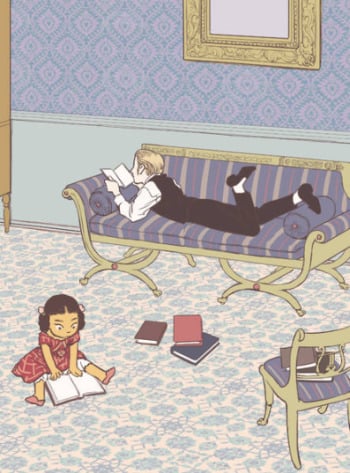 Yun Ai wanted to be a magician when she was little. But now in reality, she is a high school student who cannot even afford new stockings. Since the day she met a real magician at a fair, she desperately wants to follow her dream.

The long-awaited son of a Sioux chief and his wife is born under a terrifying omen. Will Moonlight Hair be the destroyer or his people or their redeemer? Set in the late 1860s, Moonlight Hair follows the story of a misfit struggling to fit into his tribe, without understanding why he must struggle so. He embarks on a quest to find the truth about his origins. Will he change his fate...or end it?

A deeply moving and tragic drama from the father of animal fiction writing! The 19th century America, it was the pioneering era where a wave of change in civilization struck and animals were overhunted. Seton, a hunter and an artist who is researching animal ecology befalls a request to exterminate a pack of wolf. The wolves are relentless by all means and do not yield to the hands of man, but for Seton this encounter would mark a great turning point in his life.

Two defeated samurai are exiled from Japan during the Boshin War of 1868 as the new Meiji government took hold. Ending up in Crow Territory in North America, they encounter Crazy Horse, chief of the Oglalas, and soon form a profound friendship and respect for each other's cultures. This respect was felt so deeply that the two Japanese travelers end up fighting alongside the Oglalas at the infamous encounter at Little Bighorn.

Red: Living On the Edge

Set in nineteenth-century America, Red is the last living survivor of a Native American tribe that was slaughtered by white men. On a long journey in search of revenge, he travels with Iero Ito, a samurai who ran away to America after being defeated in the Seinan civil war, and Ann, a mysterious prostitute.