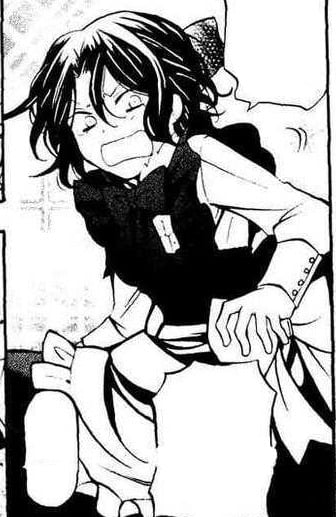 If you're looking for manga similar to Pandora Hearts: Gilbert in Wonderland, you might like these titles.

Fukimi no Kuni no Alice

Kagami no Kuni no Alice

Alice waits with her mom in an elevator. All the men look at her mom's breasts. Alice doesn't see the reason in it. Although, for some reason, it doesn't seem right. While pondering the reason why, she realizes she's in another world just like that famous protagonist in that one story. There, strangely enough, she too has the guys' eyes glued to her, for she was an adult woman just like her mother.

Are You Alice? Anthology

Are you Alice? Comic Anthology

This time Little Red meets the White Rabbit, who was incidentally halfway through a race with a turtle. Together they discover a mysterious hole in the ground which leads them to Wonderland. There she meets many delightful personalities like the Cheshire Cat, the Mad Hatter and the Queen of Hearts, in addition to characters from the first book. How exactly will the airheaded Little Red manage to get herself out of Wonderland?

Alice Asahina is a high school student interested in the Tarot, reading the future and fortune, and so on. One day there is a rain of meteors and a strange rabbit falls while she was watching the rain. The rabbit tells that the shooting stars are the precious jewels of his queen and can enter into the hearts of people, causing strange effects on its victims. Alice will be devoted to achieving these stars in the form of Alice in Wonderland.

Fushigi no Kuni no Alice

Minami does not get along with her fellow classmates. She is rich and full of pride, yet lonely with no friends. Her luck changes when the "rude and idiotic" Tomachi starts hanging around with her. One day, she sees a book and tells Tomachi, "Wonderland... wouldn't it be wonderful if we went?" Tomachi's answer and reaction surprises her as both go on a crazy journey... meeting all sorts of people and walking cards... Follow their journey down the rabbit hole...