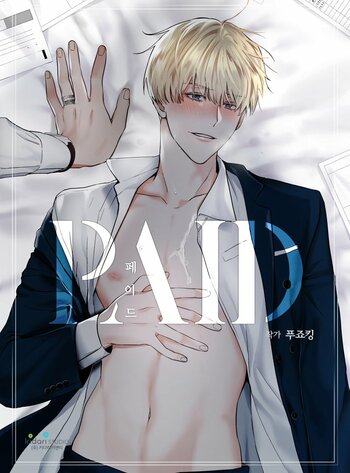 The plot in Paid has more drama and twists. I recommend this because it's the same author/artist so the characters are absolutely eye candy and have similar art style! The dynamics are both great!

Life isn't easy for an orphan, especially when you're as good-looking as Gangyoo. To survive on the streets, Gangyoo hires himself out to homely women in desperate need of a pretend boyfriend. Now in college, Gangyoo only needs one more gig to earn enough money to graduate and live a normal life. There's only one catch. His new client is a man named Soohyun. And there's only one problem. They hate each other. Being a pretend boyfriend has never been so hard. Little does Gangyoo know that his own seedy past will catch up to bite him...and Soohyun harbors a dark secret of his own.

"For $100 an hour, I want you to pretend to be my boyfriend." Takara Toudou is a poor university student who is looking for a job that pays well. His friend ends up introducing him to the super hot business student Keito Kashima, who has quite the offer: pretend to be his boyfriend for a hundred dollars an hour. On top of that, he gets to stay with Keito in his luxurious penthouse! There's no way Takara would ever turn down such a deal, so he accepts Keito's offer. As Takara and Keito start their new part-time lover arrangement, their everyday lives begin to change, and before too long, they start to see each other in a different light. Is it all just because they're pretending? Or...? This a fake love story between the calm and collected Keito and the lively and slightly airheaded Takara, that eventually turns real!!

How would you feel if you were given the opportunity to nab the house of your dreams? Yeonju and Jihun are given that exact chance, and it seems a waste to turn it down. There’s only one catch...to get that house, they have to get married! Being staunch advocates of the single life, the two of them come up with a plan. Will their fake marriage successfully fool everyone? More importantly, will they be able to keep the relationship strictly business-like?

I Was Tricked into this Fake Marriage!

After the Delpice Empire unifies all kingdoms with brutal subjugation, all the noblemen who stood up to the empire had to relinquish their titles. As her father’s only child, Leyrin Efran becomes a countess overnight, but to secure her family’s title and estate, legally she must be wed! She enlists info from the infamous Nine Night Guild to find a man of lower rank to keep the empire at bay. They deliver as requested (eep! he’s SO hot!), but things don’t completely seem as advertised...

Hanmi told a lie on the first day of her new school just to get Lee Gun to notice her. But her shallow plan backfired and now everyone thinks she's dating Junhyuk...her actual cousin!

Be Sweet to Me

After meeting in college, Yoonsung’s sultry voice is what brought us together. Sure, being a long-time couple can get dull, but cheating on me?! It’s over and I’m out, moved to a new apartment. So why is my mortal enemy living downstrairs?!