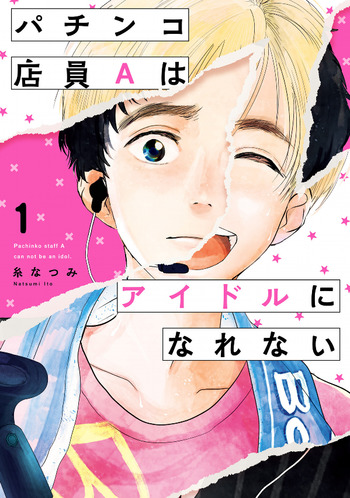 If you're looking for anime similar to Pachinko Tenin A wa Idol ni Narenai, you might like these titles.

Phantom of the Idol

Yuuya, one half of the boy pop duo ZINGS, may be the laziest performer in the Japanese music industry. His partner is out there giving 110% every night (and, thankfully, he’s quite popular), but Yuuya’s half-assed, sloppy dancing, and his frankly hostile attitude toward the audience, has the fans hating him and his agent looking for any excuse to cut him loose. The career of a pop idol just isn’t the path of easy leisure and adulation Yuuya expected… After a particularly lifeless concert appearance, Yuuya meets a girl backstage. She’s dressed to the nines in a colorful outfit, she’s full of vim and vigor, and all she wants from life is to perform. There’s just one problem: She’s been dead for a year. This is the ghost of Asahi Mogami, the beloved singer whose time on the stage was tragically cut short, unless… If ghosts are real, is spirit possession really that much of a stretch?

A Destructive God Sits Next to Me

High school student Koyuki Seri has a disposition for whipping out witty retorts... but hates people who wait for those retorts! Much to his dismay, he had caught the eye of Hanadori Kabuto, who suffers from a terrible case of delusions of grandeur and everything about him could warrant a retort. Seri swears that he will never utter a retort about Kabuto, but he just can't hold back. Not to mention, there seem to be even more strange people gathering around him...

The story is set in the city of Shimotsuke. Shimono's character, a historical hero, will hold the key to the story. The fictional idol group celebrates Tochigi Prefecture and its local specialties, including strawberries, gourds, and gyoza buns.

Tokyo 7th Sisters: Snow in I love you

The idol unit Tokyo 7th Sisters preform their winter-themed song, "Snow in I love you".