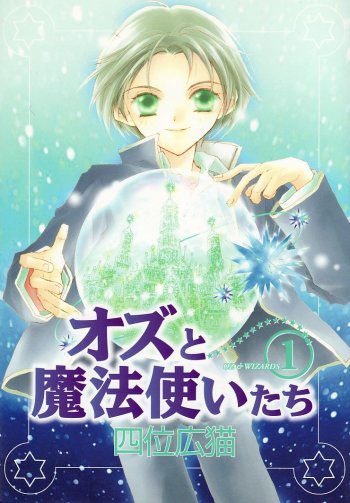 What will happen when a clumsy boy with spiritual abilities and the tsundere prince of spirits meet...?! Chiyohiko is a high school student who's normally carefree and laid-back, but actually, he has very strong spiritual ability. Tamaharu is a prince of spirits who's normally cool, but actually, he's shy and has a "tsundere" personality. One day, while performing exorcism, the door to the spirit world opens, and Tamaharu appears...

Tales of Abe no Seimei's youth.

One evening, a boy named "Air" suddenly appears at Mizuki's window, forcibly transporting him to Neverland. Having grown up most of his life without his own father, Mizuki wants nothing to do with being a surrogate father to Air and the other children, but unfortunately stuck without a way out of Neverland, he has little choice but to stay. As he spends time with Air, however, Mizuki is gradually charmed by his boyish innocence.

Long ago, Japan was protected by five crystal pillars. Though eighteen-year-old Hana Ichise was born to one of the branch families that defend the pillars using supernatural abilities, she has lived in the shadow of her brilliant twin sister, Hazuki, from a young age. When Hana finally awakens to powers of her own one day, however, she opts to hide them out of a desire to complete her high school education in peace. That is, until Saku Ichinomiya, the arrogant yet powerful head of her family’s primary branch, falls for Hana and forces her into signing a marriage contract with him. But can Hana rise to her true potential under the wing of her husband-to-be?

Pieces of a Spiral

Sakuya and Wakyo are reincarnated and reunited only to discover that Bishu-sama - their master and mentor from a past existence - is in their midst and in grave danger from vengeful demons! Still unsure of their own powers and the nature of their cunning and elusive enemy, they must race against time to rescue Bishu from the dark forces that roil within his reincarnated form.

Ralph can see angels and demons. When he was five years old he came across the winged demon Valafar and was completely charmed by him. He made a pact with the demon in order to make his wish, to live with Valafar, come true. Seven years must pass, and there are two conditions that must be met for the pact to be fulfilled. Can the older Ralph discard his ties to humanity and fulfill the pact...?

The happiness of being together and the pain of being apart… He’s the one who taught me everything… Jiro Kusunoki had always admired Yoshiyuki Kurihara from afar, drawn in by his slender frame and his big, beautiful eyes. Jiro joins the track and field team in order to get closer to his crush, but finds it difficult to keep up, as Kurihara always runs alone to isolate himself from others. Jiro perseveres, however, and the distance between them slowly starts to fade away…