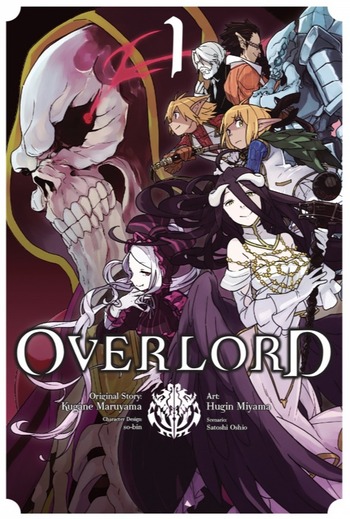 Or read the light novel if you want more story. Definitely do not read this if you've already seen the anime as this just feels like a watered down picturebook-version of the anime. Plus the story hasn't even caught up with the anime, so you'll be disappointed if you picked this up to read ahead in the story.

While the story is interesting and all they tend to devert focus on the main charecter for quite a few chapters at a time and when he is mentioned in those chapters its about things we haven't read about. So the point of view i prefer reading from such as living through the main charecter as he does those things its not all that pleasing to read, however i am one to be open minded and read on for a while and it just made me feel sympathy for the other charecters raher then appreciating the main charecter i grew to dislike him a bit. Don't get me wrong if it was a story ment to be about an evil protagonist i could understand it, however this is a story about a vrmmo player whose charecter is a Skeleton Lord who got teleported to an alternate world as his game player and pretty much regards all those other then the former npcs from his guild as nothing but live stock after a few chapters. I can't see how this can come about when he was only in the world for such a short span of time.

I am halfway there but, I do not think that story is original. It is ok, cool idea but, not very interesting or suprising. Manga has some very cool artwork parts but, I will continue to read light novel version. It is what it is.. 5/10

Just watch the Anime. It's the rare occasion where there is more effort in the Anime than the manga.

Same goes for the visual aspect and pacing. The Anime is better constructed in both matters. Beside that the Author put the manga behind the Anime so the manga lags a lot.

This manga at first glance seems like a typical fantasy-isekai manga. However there is much more that meets they eye. Instead of being just a "Overpowered Guy That Makes A Harem", its "Skeleton Nercomancer Thats Overpowered Makes A Harem"! Seriously though, the MC being a skeleton lord instead is a whole new approach to fantasy-isekai genre, and the series also adds comedy throughout the manga.

However, for early warning, there are some Mature Themes in the manga. So reader discretion is advised.

At first the seems to be really bad, however throughout the series it slowly improves. However, I personally do not like the style of the manga, and some of the character designs. For example, the MC's character design is rather abnormal;the ribcage is more "box-like" then regular human anatomy ribcages.

The MC is cold, ruthless, intelligient, and possesses traits that further compliment his "Monstrous" appearance.

The story is defintely something to pay attention to, as its idea is rather decent as well. If you are into fantasy-isekai Monster MC's, you'll like "Overlord". If you liked "Skeleton Knight Failed To Protect The Dungeon", or "Skeleton Knight In Another World", you will probaly like this too.

Thanks for reading my review!