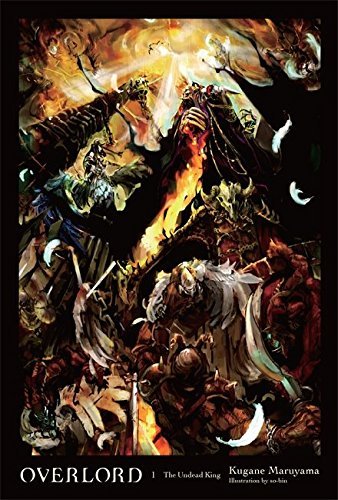 Umu.. For the story? Minus two for having a main character trapped in a game after logging in.
Art? Minus four. Since characters (Specifically Cycotus) eyes sometimes change color. And most of the images are half finished. But the artist themselves is good and worthy of praise.
Characters? Minus two for yandere main character that loves the protagonist.
Overall? Seven out of ten. Which, believe it or not, is rare.
The evil main character with the 'Great Tomb of Nazarick' and loyal followers makes this book interesting, and when it switches to the eyes of someone who doesn't know Ainz Ooal Gown, showing their reaction to first meeting him, it gives the book the spice it needs to stand out.

If you're looking for a 'other world' light novel, this is one of the best for its time. So read it. Push past the boring bits and enjoy. Watch the anime after and you'll grow attached to it.

I’ve finished the second book and I’m reading the third volume. It’s the hardest reading in Japanese I’ve done so far, but on that topic more in the language section. I’m going to try to keep the review up to date after reading each book. Overlord likely isn‘t a masterpiece of literature. I didn’t read that much books in Japanese to make qualitative comparison.

In general terms as far as the story is concerned it’s an interesting fantasy/action story for sure. Overlord is one of the trending isekai (i.e. another world). There are various approaches to this genre from straightforward harem silliness to more dramatic with a twist. Overlord is one of those that takes rather interesting approach with non-human character(s) from a game put into a different world with all the end-game gear and quirks they had. For a light novel the books are actually pretty thick and large. On average 350+ pages per volume. The light novel is source material for the anime adaptation. The books tell various character perspectives and details that are omitted in the anime. Anime rushes through the source material also by omitting some of the world/character building and minor characters. There is a lot of characters in the Nazarick and outside. Every book ends usually in some final battle. Each volume expands the world and characters in it. The world and characters settings, including game mechanics are easier to follow in the books, because it makes effort to explain them properly. In contrast anime adaptation leaves some mechanics, events hang there unexplained and confusing, like in the case of the last arc of the anime's first season and at the beginning of the second season, where suddenly bunch of characters pops up.

What are the differences in storyline between the books and the anime? The first two books adapted into anime follow the source material quite faithfully, but in the third book the differences are more notable. In the books glaring gap in power and strength between the new world inhabitants, main protagonist and Nazarick is more prominent.

Aside from the cover there are few pages of art through a volume. Usually there is a full page picture at the beginning of chapter. Plus large double sided folded one at the beginning in the book. There are character sheets at the end of volume too. It helps to imagine characters and some scenes for those who are not familiar with the anime or manga adaptation.

The book is printed as it is common for Japanese in traditional vertical layout (17 lines per page on average). The grammar is JLPT N1 and vocabulary goes beyond that (e.g. 雲耀 – archaic unit of measure for slash speed). Furigana is used only occasionally in case of rare kanji/word or modified reading. Some words are using so called regular kanji (正字) form (e.g. 摑・搔), which can be annoying as some of these are hard to write/translate. So beware that from time to time the author throws you some kind of curveball kanji or expression. Also there is Shalltear speaking in an archaic dialect of Edo period red-light district albeit not used properly. It’s kind of cute, but it makes some sentences harder to understand. Reader should be at least around JLPT N2 (advanced level) to read this series with some comfort i.e. not getting stuck on every little thing.